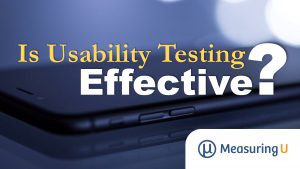 Questioning the effectiveness of usability testing may sound like a relic from the past.

In the early years of industrial usability engineering, there was a constant need to justify the activity of (and your job in) usability testing. The book Cost-Justifying Usability (Bias & Mayhew, 2005) speaks to this.

Usability testing has since gained significant adoption in organizations. But that doesn’t mean some of the core questions asked decades ago have been answered adequately or should not continue to be asked.

Although usability testing is widely used, might it actually be ineffective, and might practitioners who use it just be fooling themselves? How do we even define and measure the effectiveness of usability testing?

In this article, we examine two core assessments of effectiveness: the reliability of observing usability problems and the success of using usability testing to generate more usable (better) products.

Many researchers proclaim the importance of observing behavior over using self-reported data. But observing people using an interface isn’t an objective action like taking someone’s temperature (which itself is prone to variables that affect its reliability, such as the doctor’s experience, the device used, and the location measured). When trying to identify critical events like usability problems from observations of user behavior, there is strong evidence that what you get is what you see, and not everyone sees the same things. For a method to be valid (a type of effectiveness), it needs to be reliable.

Since 1998 several papers have questioned the reliability of observing usability problems. The common finding in these studies, which include the famous Comparative Usability Evaluation (CUE) studies, was that observers (either individually or in teams across usability laboratories) who evaluated the same product produced markedly different sets of discovered problems. For example:

Is It Realistic to Expect Consistency in Usability Problem Discovery?

The CUE-type studies (which are now up to CUE-10) are important but disturbing research. If we advocate for the importance of observation but the observations themselves are unreliable, how can usability testing be effective?

There is a clear need for more research in this area to reconcile these studies with the implied understanding that usability testing improves products.

For example, a limitation of research that stops after comparing problem lists is that it isn’t possible to measure usability improvement (if any) that would result from product redesigns derived from those problem lists.

Additionally, when comparing problem lists from many evaluators, one aberrant set of results can have an extreme effect on measurements of consistency across labs. The more evaluators involved, the more problems get uncovered and the more likely one evaluator will see an uncommon problem (matching the large problem sets also exacerbates the disagreement). For example, with CUE-4 there were 86 different experiences observed from 17 teams (76 test participants and 10 expert reviewers) with mostly different tasks. The low overlap in problems is largely a function of the 86 different experiences which increased the number of low frequency (hard-to-discover) problems and reduced the consequent overlap (something Molich and Dumas also felt was a contributing factor).

CUE-4 was a relatively uncontrolled study, allowing the participating groups to define their own tasks and apply their own methods. Even when these variables are controlled, as in CUE-9, the problem lists of observers watching the same behaviors improved but didn’t match exactly. In our meta-analysis, we’ve found the overlap among problem lists from controlled studies (~59% any-2 agreement), while less than 100%, does tend to be considerably higher than those from uncontrolled studies (~17% any-2 agreement).

Interpreting these CUE-type studies as being indicative of a lack of reliability starkly contrasts with published studies in which iterative usability tests (sometimes in combination with other UCD methods) have led to significantly improved products. For example,

The papers referenced above are case studies, but there are two papers from the early 1990s that describe designed experiments.

The results of the CUE-type studies show that usability practitioners must conduct their usability tests as carefully as possible, document their methods completely, and show proper caution when interpreting their results. But even when evaluators are observing videos of the same users (completely controlled) there will be disagreement on what the usability problems are.

Agreement isn’t necessarily the key goal of iterative design and small sample assessment. The ultimate goal is improved usability and a better user experience, and there may be many paths via iteration to that goal.

The limitations of usability testing make it insufficient for certain testing goals, such as quality assurance of safety-critical systems. It can be difficult to assess complex systems with complex goals and tasks. On the other hand, as Landauer (1997, p. 204) stated over 20 years ago: “There is ample evidence that expanded task analysis and formative evaluation can, and almost always do, bring substantial improvements in the effectiveness and desirability of systems.”

Is usability testing effective? In short, yes, when the focus is on downstream improvement in user performance and experience. Usability testing appears to be effective despite the reliability issues associated with problem lists based on observed behavior (physical and verbal). It would be helpful, though, to have more than just two designed experiments investigating how iterative design and evaluation does what it does (something we hope to tackle in some upcoming research).