Is a UX Certification Worth It? 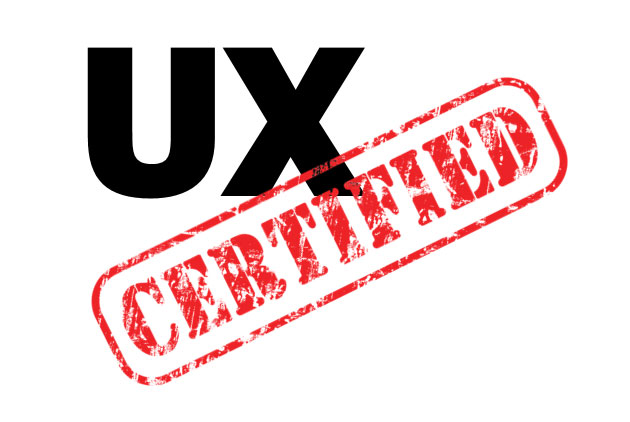 There’s been a long heated debate within the industry about the need to certify User Experience practitioners.

After all, many professional organizations—accountants, realtors, attorneys, and even ergonomists—have some sort of official certification.

Certifications provide some indication that a minimum threshold of competence has been demonstrated, which in theory should help prospective employers, customers, and the industry as a whole. Certification may even be helpful with the perennial confusion between UI and UX.

While this debate will continue, several organizations already offer varying degrees of certifications, including HFI and Nielsen Norman Group, and there are certified university courses (including our own UX Boot Camp).

Certification is a challenging topic, as is higher education in general, because it involves multiple prongs that are debated:

While there will inevitably be some disagreement on what content should be included in a certification program, there’s likely high agreement on several core concepts and activities. So while few can argue against the benefits of the knowledge and experience gained from a certification, many do wonder whether the credential and its corresponding cost are worth the price.

After all, a motivated person can read a few books and papers, watch free online videos, and conduct some projects to get real-world experiences and knowledge (just as in higher education). As Matt Damon’s character colorfully expressed in Good Will Hunting:

“You dropped 150 grand on an education you could have got for a dollar fifty in late charges at the public library!”

I explored a similar topic 7 years ago when examining whether a PhD was worth the price. The short answer was, on financial grounds alone, there is increased pay for practitioners with PhDs. However, the increased salary generally doesn’t overcome the years of deferred income from being out of the workforce (the knowledge and experience can of course be invaluable).

With professional certifications, there isn’t years of deferred cost from being out of the workforce, but there is the cost and some time. Most certification courses cost between $3,000 and $10,000 and cover everything from usability testing essentials to UX design and principles and usually last a few days to weeks.

To understand whether there is any evidence of financial gain from obtaining a certification, I examined the UXPA salary data from 2016 that we reported earlier this year. Among other things, participants were asked whether they have any certifications. 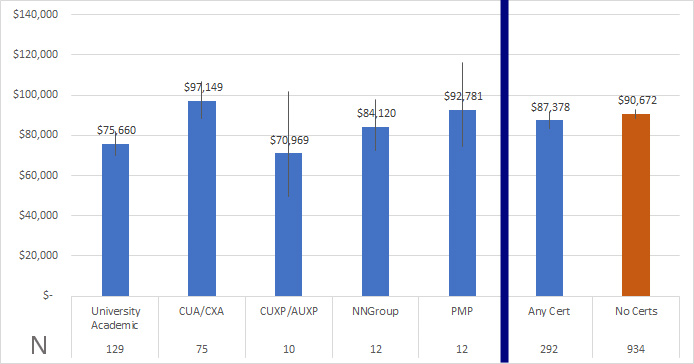 The fact that the average salary is lower for respondents with certifications does not mean that the process of obtaining a certification actually lowers salaries any more than exercise causes obesity. It’s much more likely that those who want to break into the field, continue their education, or don’t have a degree in a UX-related field may be more likely to seek out certification. It could also be from a confounding variable.

We saw with UX salaries that two of the biggest drivers of salary were years of experience and education level. In that analysis, having a certification was not a significant driver, and in fact this data is showing why—respondents with certificates tend to have lower, not higher, average salaries. But not being a significant driver means that the variation in certification was accounted for by other variables in the analysis.

Figure 2: Average years of experience respondents had for each certification type compared to no certifications “No Cert”.

We’re likely seeing higher salaries for the CUA/CXA and PMP groups because they’ve been around longer and respondents with these certifications have more years of experience. The opposite is likely true for university programs that may be more recent additions. Knowing when respondents received their certifications will help better understand the effects of certification on salary (data we currently don’t have).

Figure 3: Average salary (log-transformed) for respondents with a certification and without by highest degree obtained.

Interestingly enough, this was even the case with participants with an HCI-related degree. Of the 250 respondents who had a certification and salary data, 59 had a degree in HCI but had on average a 10% lower salary (not statistically significant).

This does not mean certifications aren’t financially beneficial—they very well may help open the door to a new career or provide a bump in hiring (as is the case with advanced degrees) and help practitioners gain more credibility in their jobs. Future analysis is needed to better understand the links (and covariates) of certification on salary and hiring and how different certification programs may do a better job of both preparing and rewarding their participants.

Thanks to Jim Lewis for commenting on a draft version of this article.