How Satisfied Are UX Professionals with Their Jobs? 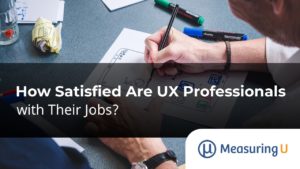 We’ve all got bills to pay. But there is more to a job than just the pay.

The type of work you do and the people you work with have a lot to do with a sense of satisfaction. Consequently, job satisfaction has been measured extensively for decades in many industries.

To gauge how satisfied UX practitioners are with their jobs, the UXPA has been asking respondents a job satisfaction question since 2014. Participants are asked on a scale of 0 to 100, with 0 being not satisfied at all and 100 being completely satisfied, where they rate their overall job satisfaction with their current position.

Comparing UX Satisfaction to Other Industries

From what we could find, Glassdoor has the most up-to-date job satisfaction scores across enough comparable jobs to provide context to the UXPA satisfaction scores. Glassdoor uses a “Job Score” based on a five-point scale (5.0 = best job, 1.0 = bad job). As far as we know, Glassdoor has not published any psychometric validation of its job scores or sampling methodology (keep that in mind while reading), but a paper published in 2019 found a correlation between Glassdoor satisfaction ratings and ratings from results of the 2017 Federal Employee Viewpoint Survey significantly correlated (r = .516). Glassdoor publishes a list of its top jobs with satisfaction scores for comparison. To even make this list, a job has to be relatively high in satisfaction.

Table 1: Job satisfaction scores from Glassdoor (converted to % scale) and compared to the UXPA average score.

When we sought to understand the key drivers of salary from the 2022 UXPA Salary Survey, we were able to explain a substantial 68% of the variance (similar to years past). When applying the same multivariate regression technique to satisfaction, we could explain only a much lower 3% of the variance. (This isn’t surprising, because the correlation between salary and satisfaction was a small but statistically significant .177, p < .0001.)

Part of the reason could be the restriction of range (75% of respondents rated their job satisfaction as 65 or greater).

Almost all of the sample is salaried, working full time, and not performing manual/physical labor. These job characteristics, according to research from PEW, are important drivers of job satisfaction in the U.S.

Historically, we find that the variables that have had a statistically significant impact on satisfaction include country, job, salary, and the number of hours worked per week. To find these relationships, we sometimes have to look at the extremes in some variables and not the full range, suggesting some nonlinear relationships between satisfaction and job characteristics.

In the analysis of salaries, the biggest predictor of salary was where you live, both the country and, within the U.S., the region. The highest salaries are in places where it’s very expensive to live (e.g., Northern California). To see how satisfaction differs by geography, we compared satisfaction scores by the countries with the most respondents for the last four salary surveys.

Figure 2 shows that respondents from the U.S., U.K., and Canada reported nominally (but not statistically) higher satisfaction scores in 2022 than those in Germany. The lower scores from the 15 German respondents could be from genuinely lower job satisfaction, normal small-sample variation, or different regional/cultural interpretations and usage of rating scales. For example, we’ve seen instances in the literature and our own research where respondents in Japan generally respond lower than respondents in western countries to the same stimuli and rating scale.

Respondents in the UXPA salary survey were asked “Which describes your current position? (Select all that apply).” We found the most notable differences in job satisfaction came from respondents who selected “Technical Writer” (selected by 12) or “Programmer” (selected by 5). Figure 3 shows the mean satisfaction scores. A more substantial number of respondents selected User Researcher (382), Usability Practitioner (125), Interaction Designer (131), and Interface Designer (116).

To control for possible country effects, we examined differences within the U.S. only. We found similar results, albeit to a lesser degree. For U.S. respondents, those making above $150K (119 respondents) reported 7% higher satisfaction scores than those making between $50–100K (108 respondents—a statistically significant difference). Only seven respondents reported a salary of less than 50K in the U.S.; that, coupled with high variation, contributed to the absence of statistically significant differences between other salary groups.

However, things changed for those who exceeded 60 hours. The five respondents (about 1% of the sample) who reported working more than 60 hours have an average satisfaction that is 34% lower than those working fewer hours. This difference is not statistically significant because the sample size for 60+ hours was very small, and there was a lot of variability in satisfaction ratings among those five respondents (25, 30, 65, 70, 83).

We examined several other variables based on the research in the job satisfaction literature. Although some cases had some small differences, they don’t add to the predictive ability of satisfaction (meaning other variables already accounted for what they’re adding). These variables are gender, job level, company size, experience, age, U.S. region, and supervising direct reports. A few notes on some of these: