Were most Software Millionaires born around 1955? 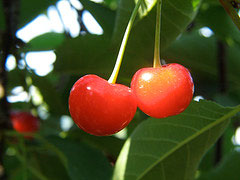 If you’ve read a book by Malcolm Gladwell then you know how he has a knack for making the mundane meaningful through drama-filled story telling.

In his book, Outliers, he makes a convincing case that birthday matters for success in hockey. Being born as close to the year-end cut-off provides a developmental advantage.

According to Gladwell, a disproportionate number of NHL hockey players have birthdays in January, February and March.

Those few extra months of development provide a crucial advantage over other maturing boys.

While professional hockey might not be in your sights, financial success in software might. Are there also certain birthdates that could help you become the next Bill Gates?

Gladwell argues that Bill Gates wouldn’t have founded Microsoft if he wasn’t born at just the right time (and have access to the right opportunities). Gladwell cites 1955 (specifically between 1952 and 1958) as the right time to be born to make it big in high-tech. This sweet-spot ensures an ideal age to be ready for the 1975 personal computer revolution.

He lists the birthdays of these famous tech millionaires:

Gladwell argues that it’s no coincidence so many software millionaires were born in an 18 month window near 1955.

Is he right that birthdays are as important in software as they are in hockey, or is he just being fooled by randomness?

What are the chances?

Simple chance occurrences happen all the time. Statistical Analysis is fundamentally about separating chance occurrences from real causes. To find out whether a birth year has a major impact on success in high-tech I would need a large dataset of birthdays for this population.

The first problem I ran into was defining the population in Gladwell’s list. What he calls “Silicon Valley Tycoons” includes a mix of founders and CEOs of both software and hardware products from in and outside Silicon Valley (Microsoft was founded and based in Washington).

I’ll consider Gladwell’s list a sample of people, from any geographic-location, who made their fortunes in some software or hardware based business, with more emphasis on the former. This leaves out the early computer pioneers like IBM, Burroughs (now Unisys) and Hewlett Packard from the mix.

I searched through dozens of corporate websites, annual reports, obscure Wikipedia entries and press releases to find as many birthdays of software millionaires in search of evidence for the birthday influence.

I was able to find the following 41 birthdays (in order of birth year).

Some of the less glitzy founders have virtually no public information or birthdays (e.g. Borland, BEA, BMC). So this list, like Gladwell’s, is biased to the more well-known, more financially solvent companies and founders—although it is probably large enough to provide a reasonable picture of the software industry.

When we graph the birthdays we indeed see a spike in births between the years 1952 and 1958 as Gladwell suggests. In total there were 13 birthdays (which I was able to find) between these years. Gladwell named 9 of the 13 in Outliers. 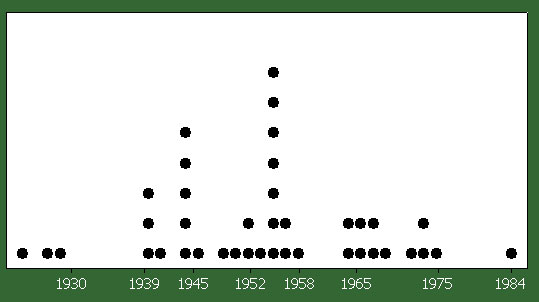 Figure 1: Distribution of a sample of 41 software millionaire birth years.

Sure, maybe Gladwell is wrong, but did he get you thinking?

To his credit, Gladwell states that he’s not suggesting that every software tycoon in Silicon Valley was born in 1955. “Some weren’t…But there are very clear patterns here, and what’s striking is how little we want to seem to acknowledge them.” (Outliers p65).

So even saying most software millionaires were born in this period is a stretch.

While we can be critical of Gladwell’s tendency to cherry-pick data to make his points, his ideas don’t need to be entirely dismissed even if they crumble under scrutiny.  Gladwell is less concerned about the veracity of his claims than he is on whether they get you to think (What the Dog Saw p. xv).

So he did get me thinking. I think he is was onto something when examining the influence of simple things like birth dates. So I continued the analysis, but in another direction.

The baby boom resulted in a population spike following World War II.  How much of the spike in software millionaires is just due to a spike in population? Most of these millionaires were born in the US, so I looked to US birth data from 1920-1970.

I dropped the 1980s from the table since the last half of that decade includes a lot of people too young to have a chance to have shown success in software (even Facebook’s Mark Zuckerberg was into his 20’s before making millions).

US births by Decade : National Center for Health Statistics

I performed a simple linear-regression analysis by using the number of US births as the sole predictor for the total number of software millionaires (see figure below). 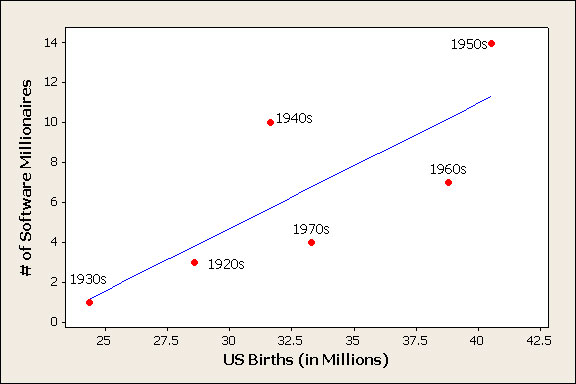 More CEOs were born during the 1950’s

If we add three more years to Gladwell’s software millionaire sweet-spot of birth years, we’re encompassing the entire decade of the 1950s.

To look for evidence that the 1950’s generated more software millionaires simply because there were more people I looked to see if the same pattern held for all CEOs regardless of industry.

I drew a random sample of 70 companies from all industries except software from the 2009 Fortune 1000 list and looked up the current CEO’s birthday.

It turns out, there are also more CEOs born in the 1950’s across all industries.

The graph of both samples shows the 1950’s bulge for both groups (software versus all industries). 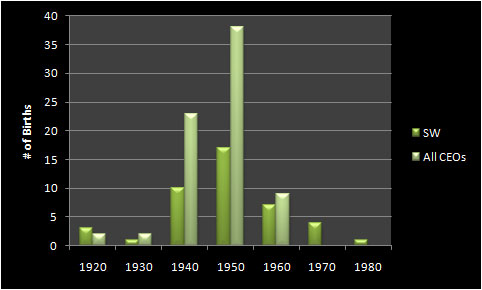 There is a very strong correlation between the birthdays of CEOs and software millionaires (r = .971 p <.01). This linear relationship is shown below. 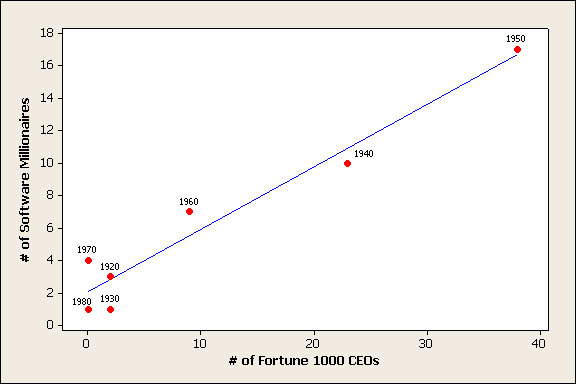 In fact, over 93% of the variation in software millionaire birthdays can be explained by the general spread of all CEO birthdays across the decades (99% if the 1980s are excluded). In other words, the software industry is no different than all other industries.

Coffee, tobacco and banking have been around for hundreds of years yet we are still seeing striking success from pioneers in these less glamorous industries.

There’s still time to be the next Bill Gates

If you’re an aspiring high-tech mogul, you can still be the next Mark Zukerberg, Bill Gates or Steve Jobs. You weren’t born too late. You just need to be one of those 1 in 14 million.

Gladwell is correct that being born at the right time is critical in being able to take advantage of a major economic shift. You might be too old or too young (or not even born yet) to take advantage of the PC’s introduction, but it looks like there’s ample time to catch up or re-tool your skills regardless of your birth-year.

It seems there is a certain person who has the skills and talents to exploit an opportunity regardless of how old they are. The real mystery is in what combination of factors drive these 1 in 14 million to success. It is likely the more banal  combination of parents, peers, personality, genes, circumstances and luck–and no doubt the subject of more books on the secret of success.

For the few hockey players who make it to the pros, birthdays probably matter. For the 1 in 14 million software millionaires, birthdays may be a time for lavish celebrations, but they are unlikely the secret to their success.