Net Promoter Scoring: The Mean Works As Well As Promoters Minus Detractors 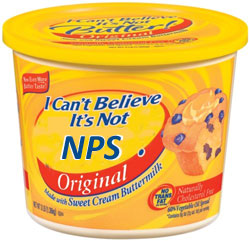 Ask your customers if they’d recommend your product using a scale from 0 to 10 where 10 means extremely likely.

Now find the average of the responses. Is an average score of say 7.212 good?

Interpreting averages from rating scales is notoriously difficult unless you have something to compare the average to.

One of the reasons the Net Promoter Score is so popular is that it generates a seemingly more interpretable measure.

Knowing that you have 20% more customers promoting than detracting your product does mean something.   Of course, it still begs the question: is 20% good?

So you still need an industry benchmark to make sense of your Net Promoter Score. For example, the Consumer Software Industry has an average Net Promoter score of 21%–meaning a 20% is about average for products like Quicken, QuickBooks, Excel, Photoshop and iTunes. A 20% in the commercial Airlines industry would probably be among the highest scorers.

There are many ways to report the scores of rating scales, such as top-box scoring like the Net Promoter. We get some sense of intuitiveness, but how much do we lose in the process and would the mean work just as well?

I looked at the Net Promoter Scores for 87 software products and large traffic websites. The sample sizes were between 30 and 300 and were collected over the past 12 months. There was a good range of low and high scores. I looked at the correlation between the mean response to the likelihood to recommend question and the properly computed Net Promoter Score.

I found that there was an extremely high correlation between the two (r = .959). In examining the relationship in the scatterplot you can see some curvature to the relationship and I found a cubic equation fit better than a linear one. 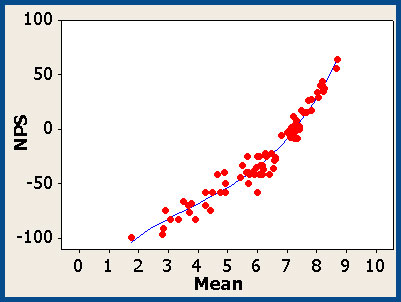 When you convert the 11 point scale to 3 points (Promoter, Passive and   Detractor) you lose information. For example, if people switch scores   from say 0’s to 5’s between products, there won’t be any change in the   Net Promoter Score.

This analysis suggests you’re losing about 4% of the information when you use the Net Promoter Score instead of the mean.The graph and regression equation also show that a mean of about a 7.28 gets you a 0% NPS (the same proportion of Promoters and Detractors).

Enter a mean to get an estimated Net Promoter Score or enter an NPS to get the estimated mean.

In short, using Net Promoter Scoring provides a possibly more digestible   metric without suffering too much loss.  The mean is a close substitute which may work better for statistical comparisons because it doesn’t lose any response information. Keep in mind, you’ll still want to compare your NPS to something meaningful like a competing product, prior release or industry benchmark.