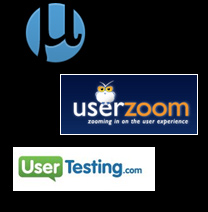 If you’ve considered using unmoderated remote usability testing with video here are answers to several questions you might have.

On February 28th 2012, I hosted a live webinar sponsored by the folks at Userzoom and Usertesting.com.

The topic was best practices for unmoderated usability testing and in it I walked through the results of a comparative usability benchmark analysis I conducted.

We had 61 users attempt the same two tasks on Enterprise.com and Budget.com (two leading rental car websites) and had the audio and screen recorded.

We filled up all available slots so if you missed the webinar you can view a recording of it and download my slides.  We had a lot of questions that didn’t get answered so here they are:

If you are not making a comparison in a benchmarking study then you are conducting the Type B study from above. The sample size you need is then based on how precise you want your estimate to be and the type of metric you are collecting.

For example, if you want to have a margin of error of +/- 5% around your completion rates, you should plan on a sample size of 380, assuming the completion rates hover around 50%. See the response above in #3 for Study Type B.