Do Users Fail A Task And Still Rate It As Easy?

Have you ever watched a user perform horribly during a usability test only to watch in amazement as they rate a task as very easy to use? I have, and as long as I’ve been conducting usability tests, I’ve heard of this contradictory behavior from other researchers. Such occurrences have led many to discount the collection of satisfaction data altogether. In fact I’ve often heard that you should watch what users do and not what they say because attitudes are often at odds with their behavior. For example:

So there appears to be some well formed opinions about the collection of subjective usability data. I wanted to see if I could find a systematic pattern either supporting or refuting the apparent truism that users say and do different things.

The third quote from above “Don’t Listen to Users …” comes from a Nielsen article from 2001. A further look at this article suggests the issue might be a bit more nuanced. In it he reports on a relatively strong correlation (r = 0.44) between users’ measured performance and their stated preference (in reference to Nielsen & Levy 1994). In fact, in an earlier analysis I did with Jim Lewis (Sauro & Lewis, 2009) we found an even stronger correlation of .51 between post-task ratings of usability and completion rates. Post-task ratings of usability are those few questions asked immediately after a task is completed. While they can measure different things, they all tend to correlate highly with each other and attempt to measure something like the perceived ease of use or the overall satisfaction with the task. For brevity, I’ll refer to what they are measuring as satisfaction.

When users fail a task 14% rate the experience at the highest possible score in satisfaction.

To dig into what a correlation of .51 between completion rates and post-task satisfaction means, I returned to the database from which we did that analysis. It has since grown to contain 123 usability tests representing data from over 3000 users. They are summative usability tests from 30 institutions and are a mix of mostly lab-based (attended) and remote (un-moderated) summative usability tests. In this dataset 53 tests contain some type of post-task usability questionnaire. From these tests there are 677 tasks generating 19,576 observations of users attempting a task and rating their perception of the usability. If users say and do systematically different things then it’s going to show up here.

Almost all questionnaires (94%) use either 5 or 7 point scales and are either a single questions such as “Overall, this task was” (very easy to very difficult) or averages of 2 to 5 questions (see for example the ASQ, Lewis 1993). The remaining questionnaires are the Subjective Mental Effort Questionnaire (aka SMEQ) (4%), some Usability Magnitude Estimation (1%) and some other 3 point scales (1%) See (Sauro & Dumas 2009) for more information.

To analyze the different scale types together, I converted the raw scores into percentages of the maximum score and reversed some scales so they all pointed in the same direction—where higher scores mean higher satisfaction. For example, on a five point scale raw scores of 1,2,3,4 and 5 become 0, 25, 50, 75 and 100%. On a seven point scale they become 0, 16, 33.3, 50, 66.6, 83.3 and 100%. There would be more points in-between for questionnaires that used more than one question.

Let’s first look at the users who failed a task and see how they rated it in terms of satisfaction. Of the 19,576 task observations, 5,594 were failures (around 29%). Of these failed tasks, 790 or 14% rated the task the highest possible score in satisfaction (with a 95% Confidence Interval between 13.2 and 15.1%). That would be like rating a task a 5 out 5 after failing. Users are about 6 times more likely to rate satisfaction something less than the maximum score when they fail a task (86%/14%). Figure 1 below shows the distribution of responses when users fail as a percent of maximum scores. 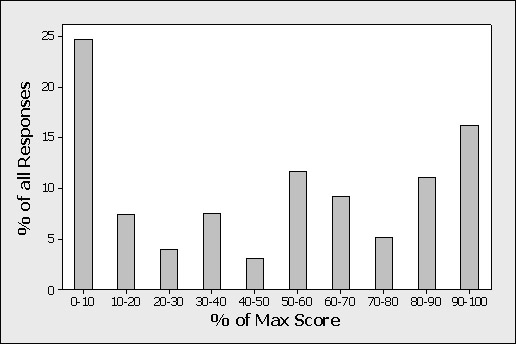 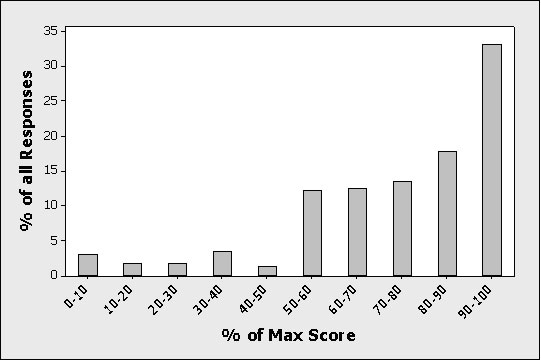 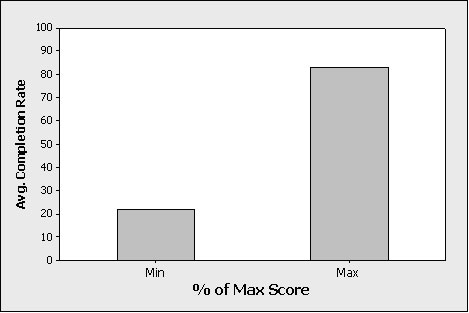 So do users who fail a task still rate it as easy? If we restrict “easy” to only mean the maximum level of satisfaction, then about 14% of users do. If we more loosely define easy as anything above 75% of the maximum score (3.75 out of 5 and 4.9 out of 7), then this happens about 1/3 of the time.

I’m inclined to think that it’s those extreme responses that garner all the attention. There are likely a number of reasons for the less than perfect correlation between task success and satisfaction rating. One major factor is that users aren’t always aware they “failed” a task, and so, thinking they successfully completed it, give it a high rating. The noticeable task failures lead to low satisfaction ratings most of the time. The 80/20 rule tells us that extreme measures are a decent indication of task outcomes. I’m also inclined to think that rating tasks in the extreme after poor task performance are such salient events that it contributes to an Availability Heuristic. We researchers are generally interested in improving ease of use, so we tend to focus more on task failures. We also tend to remember those 5’s much more than all those 3’s and 4’s. In other words, we remember the task failures and we really remember the task failures which elicit favorable satisfaction scores. But in general the extreme satisfaction responses tend to be informative. Users are about 6 times more likely to rate satisfaction something less than the maximum score when they fail a task. They are also 4 times more likely to complete a task when they rate it the maximum satisfaction versus the minimum satisfaction score.