The Benefits of Aggregating Judgment 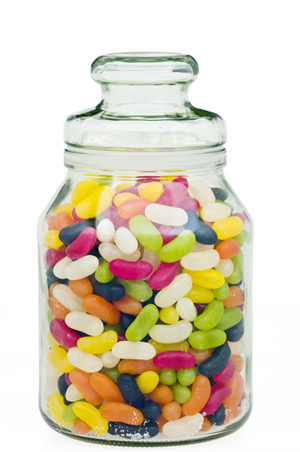 How many jelly beans are in the jar?

Your best guess is probably wrong.

But if I were to ask a few hundred people their guesses and calculate the average, the average would turn out to be pretty accurate. Some guesses are in fact correct, but they are rare and you don’t know ahead of time which guess will be correct.

If you’re familiar with the game show “Who Wants to be a Millionaire” (or the movie based on the Indian version of the show), you may know that when a contestant gets stuck trying to answer a question, they have an option to ask the audience.

This track record doesn’t come from asking the smartest audience member, but instead comes from selecting the top-picked answer by the audience–in essence using the wisdom of the crowd.

In many cases, the judgment from multiple people collected independently and then aggregated is better than even the best individual judgment. And this principle applies to more than trivial things—it applies to predictions with real consequences and from experts with advanced degrees.

Forecasting the growth (or contraction) of an economy and unemployment has major consequences for both public policy and the private investor. However, it’s usually the case that the average forecast from different economists is better than any individual forecaster. This has been called the Reverse Lake Wobegon effect, in reference to the fictional town where everyone is above average. In the reverse, everyone predicts worse than the average forecast, but it’s not fictional.

The idea of aggregating results is a powerful methodological tool that can smooth out unusual forecasts, scientific conclusions, and judgments from experts and novices alike. It’s the power behind meta-analysis and using the average of several polls to predict the winner of an election.

This same principle of aggregating can be applied to user and customer research as well. Here are five applications where aggregating is to your advantage.

The Downfalls of Aggregating

Of course, unlike polling, economic forecasts, jelly beans, and correct answers to factual questions, it’s often difficult to verify the accuracy of ideas and insights gleaned from most customer research. There isn’t an objectively correct severity rating or gold-standard list of usability problems to verify our methods with.

What’s more, relying on a group forecast isn’t a panacea; it has its pitfalls. For example, some audiences actually try and trick the contestant by giving the wrong answer! Judgments can also be based on false data or poor assumptions. Additionally, if people influence each other when making a judgment, it’s easy for group think to set in, thus removing the advantage of pooling the judgments. This is why it’s essential to collect the judgments independently.

Despite the potential pitfalls and problems with checking the accuracy of judgments, the principle of aggregating independent judgments helps improve the reliability and validity of the assessments of the customer experience.