Changing the Net Promoter Scale: How Much Does It Matter? 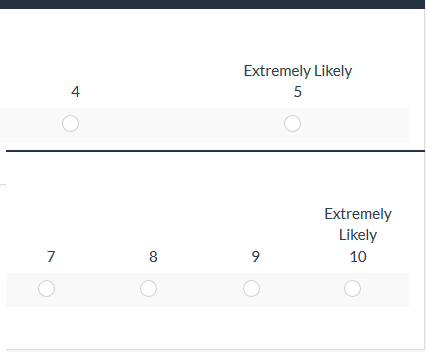 The Net Promoter Score (NPS) is a popular metric for measuring customer loyalty.

For many companies, it’s THE only metric that matters.

With such wide usage across different industries, departments, and companies of various sizes, it’s no surprise many questions and controversies arise.

Responses of 9 and 10 are considered “promoters,” 7 and 8 “passives,” and 0-6 “detractors.” Detractors are customers likely saying bad things about your product or service and even discouraging others to use it. Promoters are customers most likely to spread positive word of mouth.

One question that’s come up about the NPS is whether the 11-point scale is necessary. Fred Reichheld who originally wrote about the NPS describes the 11 response options with 0 being a clear signal to respondents that 1 doesn’t mean the best. “The confusion rarely occurs with a 0 to 10 scale.” pg 99

Reichheld himself acknowledges variation in the number: “Other scales seem to work” and cites as an example Enterprise Rental Car’s 5-point scale. pg 98

But concerns over the 11-point scale are usually a practical and not statistical issue. The likelihood to recommend question (LTR) is often presented along with other items in a survey. Many items usually have 5- or 7-point Likert-type questions. Including the 11-point scale requires respondents to switch scales—often from the 5- or 10-point scales an organization uses. What’s more, the width of an 11-point scale makes viewing it on compact in-product surveys and mobile screens harder.

The result is some organizations I’ve worked with use a 10-point version (1 to 10) and others use a dramatically changed 5-point scale for the LTR item. Does this change matter and if so, how much?

Does changing the number of response options have an effect?

To understand what effect changing the number of response options would have on the Net Promoter Score, we examined the difference in scores using three response option variations: 11 point original, with 10 and 5 point variations (shown respectively below).

We collected data from 520 U.S.-based participants with a mix of age, gender, and occupation using an online panel in Nov 2017. There were two studies: a retrospective analysis and an unmoderated UX benchmark study.

Our goal was to include brands and products with a range of Net Promoter Scores (high to low performers). In the retrospective study, we recruited participants that had used a product or service from the following companies (49 to 53 responses were collected per company/product).

In the UX benchmark study, participants were randomly assigned to one of two online learning platforms (Lynda.com—part of LinkedIn—or Udemy) and asked to complete two tasks on the website using the MUIQ research platform.

In both studies, participants were assigned all three variations of the NPS question in randomized order to avoid sequence effects. The questions were not presented on the same page and in the retrospective study an additional question asking about their experience was placed between each variation of the NPS item.

We used the following scoring rubrics to convert all raw responses to a Net Promoter Score with promoters, passives, and detractors by company/product.

The results in the table below show the Net Promoter Scores by scale type and product after removing eight respondents for unusual response patterns (see removal notes below). As expected, we saw a good range in Net Promoter Scores using the original 11-point scale: Netflix had the highest NPS at 63% and Comcast the lowest at -55%.

An examination of the raw responses shows that some participants provided dramatically different responses. The table below shows five unusual responses between 10 and 11 points from the same participant and three between the 5- and 11-point responses.

It could be these participants made a mistake or weren’t paying attention when responding. It’s also likely that some participants may have been influenced by the prior questions and either got confused when the scale changed or attempted to be consistent by providing the same or similar response. I removed these eight egregious responses from the dataset when computing the Net Promoter Scores from the table above. However, even after removing these unusual responses, differences remained.

The table below shows both the absolute and raw differences between the 10 vs. 11 point and 5 vs. 11 point variations by company/brand and the total mean differences across all 11 companies/brands.

Interestingly, both the 11 vs. 5 and 11 vs. 10-point scales have the same mean absolute difference of four percentage points.

Not surprisingly, removing the lower part of the scale (Reichheld’s 0) increased the score for the 10-point scale. This can be seen in the 11 vs. 10 column where 10 of the 11 Net Promoter Scores are higher or the same than the 11 point (only iTunes was lower in the 10-point condition).

Reduction in Promoters for 5-Point Scales

There was a much more negligible effect on promoters for the 10-point variation. The total number of promoters slightly increased from 184 to 188 out of 512 (a 2.2% increase in promoters).

However, the number of promoters substantially decreased for the 5-point variation from 184 to 153 out of 512 (a 16.8% decrease; p <.01). Consequently, the differences in scores were not as upwardly biased as the 10-point version. For the 5-point version, 5 of the 11 scores remained the same or increased and 6 of 11 decreased relative to the 11-point version.

This analysis showed a number of things about changing the scales used in computing the Net Promoter Score and some takeaways.