How Smartphone Usage Changes Over Time and By Income Group 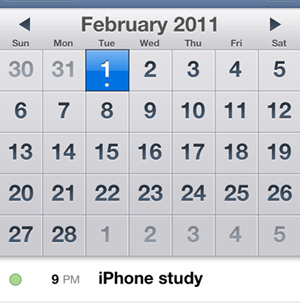 What would happen if you gave a few dozen people a free iPhone AND cell service for one year and then monitored their usage?

This isn’t some story about the NSA, instead, it’s longitudinal research that was actually conducted at Rice University and reported last year [pdf].

Much of the data we have on mobile usage comes from snapshots in time or perhaps from over a few weeks.

But as anyone with a smartphone knows, how you used the phone the first day you got it differs from how you used it on the 300th day. Observing that behavior change over time is valuable for designers and researchers.

In the study, 34 participants were all students at Texas colleges, divided about equally into three groups based on socioeconomic status (basically low, medium and high income groups).  The data was collected between 2010 and 2011 on the iPhone 3GS.

While 2010 and 2011 may seem like an eternity in mobile years, longitudinal studies, by definition, take a long time to collect and analyze. However, the findings are likely still relevant.  In addition to monitoring usage using some logging software installed on each jail-broken iPhone, the researchers complemented the logging data by also asking participants about their usage.

Here are some of the more interesting things they found:

There is a pareto distribution of usage

This study provided a rare look at the differences in socioeconomic status after matching for other variables like computer usage and gender. The biggest differences were observed between the highest SES group (basically college kids with family income > $80k) and the lowest SES group (community college kids with family income between $0-$35k per year).  The comparisons are shown below and in the comparison table.

The major limitation to this study is the restriction to students at a selective private university for the representation of the medium and high SES groups.  Generalizability to socioeconomic status groups in general is limited, as all the participants are students, representing a narrow age band with an average age of just 19. That is, being a student and generally young aren’t representative of the large diversity of ages and occupations within any SES strata.  In addition, only the iPhone was used in the study (as it had the largest market share when the study began in 2010), which also limits the generalizability to a single platform.

Finally, the participants in the study consented and were aware of being monitored for the year (or six months for the lowest SES group). This observer-effect likely had an impact on how the participants used the device, such as the number and type of websites and apps they purchased and used.  Some amount of bias is inevitable in all user research studies.

Nevertheless, conducting studies like these takes a lot of money and diligence to coordinate. This study was unique not only in its duration (one year) but also because it mixed both usage data (logging) and perception/attitudinal data (SUS and open-ended questions). The authors rightly point out that if they’d relied on usage data alone they likely would have assumed the lowest SES group had higher perceptions of usability (as they used the phones twice as much!).

Despite changes in technology, understanding how overall usage patterns change over time and differ by socioeconomic status can help designers and researchers target apps, pricing and even hardware performance based both on the lifespan of an application and the difference in socioeconomic status of the customer market.