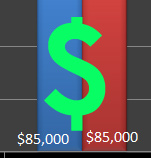 Last year we reported on the results of the UPA salary survey.

As with years past, experience is one of the biggest predictors of salary, along with whether you are a manager, have a PhD and live in the Northeast or West Cost of the US.

UX is quite a broad field so I wanted to provide more detail on the salaries by job function.

I’ve categorized the jobs into four distinct groups: Information Architect, Designers, User Researchers and Managers.  These groups account for over 80% of all responses.

Table 1 below shows the percentage of respondents calling themselves an Information Architect (legitimately or not) or Manager for the last two surveys. There wasn’t much change between 2009 and 2011–6% vs 5% for IAs and 23% vs 21% for Managers .

There was more of a shift for the other two groups. The percentage of researchers are a bit lower and the proportion in designer is more than twice what it was in 2009.

Below is a graph of the median salary by Job Title for 2009 and 2011. The median is the point where half the respondents make more and half make less than the amount shown. The error bars are 95% confidence intervals and show us the plausible range of the median salary for all practitioners (assuming the UPA salary survey is representative).

We can see that all groups are basically flat except managers who saw median salaries increase more than 30% (be sure to congratulate your boss at your next 1:1 meeting). 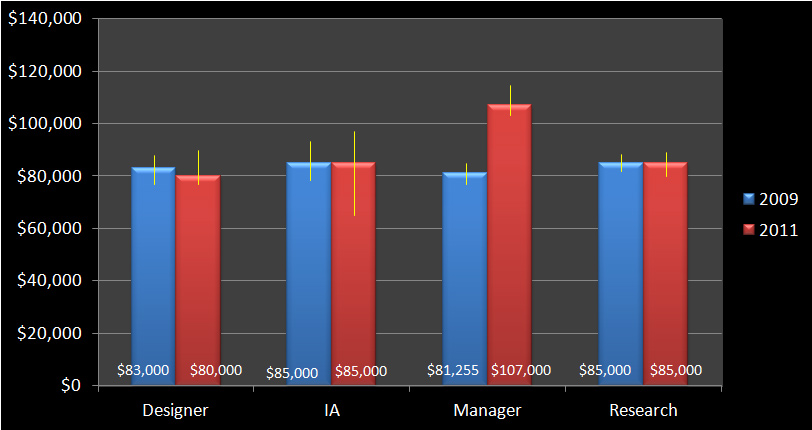 The graph also shows that all groups have about the same median salary of between $80k-$85k except managers (especially in 2011) which is why only manager is a significant predictor of salary.

To help make this information more helpful for negotiations and bragging rights, I’ve shown the 25th and 75th percentile values for each group in the table below.

So for example, designers making around $105k per year are making more than are 75% of all designers.  Information Architects making $50k are paid higher than 25% of all IAs.

So despite UX being a field with wide ranging skills, the average salaries for individual contributors are about the same.