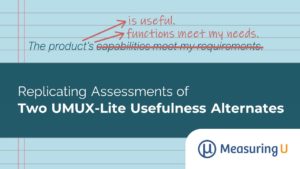 The original wording of the UMUX-Lite Perceived Usefulness item is “{Product}’s capabilities meet my requirements.” Since we started using the UMUX-Lite in our practice, we’ve had numerous clients ask whether it would be possible to simplify the wording of this item to more closely match the simplicity of the UMUX-Lite Perceived Ease item, “{Product} is easy to use.” In response to these requests, we’ve investigated the measurement properties of a variety of alternate wordings for this item over the past year.

We found very close matches in correspondence of means and response option distributions for three alternates, supporting their use as equivalent items for the original wording:

For two other alternates, the evidence for equivalency was less clear:

The mean difference between “is useful” and “capabilities meet my requirements” was larger (about 1.4 points, n = 201) but also not significantly different. There was no significant difference in top-box scores, but the difference in top-two box scores was about five points—not statistically significant for that data, but large enough for concern regarding scale equivalence. This nominally larger difference made us wonder whether people are more likely that an interface is useful. That is, something can be useful but not quite meet someone’s requirements or needs.

We’ve been running a lot of comparisons of these types of alternates, and we generally find very small differences, so it’s possible these results were due to chance. Replication is a powerful tool to help weed out unusual findings. To check, we collected more data.

We included the original and both alternate versions of the Usefulness item as part of a survey on the UX of mass merchant websites we conducted in April and May 2021 using an online U.S.-based panel (n = 462). The survey was programmed in MUIQ® so that the different versions of the items were randomly placed and would not appear next to each other.

Figure 1 shows the mean UMUX-Lite scores from the study.

There was no significant difference between the Original and Alternate 1 (functions/needs) UMUX-Lite scores (t(461) = 0, p = 1.0). Although their standard deviations were slightly different, their means were the same to over four significant digits. The 95% confidence interval around this difference ranged from −.69 to +.69, with 0 in the center. With a difference of 0 being plausible and any difference larger than seven-tenths of a point being implausible, it’s reasonable to conclude that there is no practical difference in means measured with these versions.

On the other hand, the difference between the Original and Alternate 2 (useful) UMUX-Lite scores was statistically significant (t(461) = 3.7, p < .0001). The magnitude of the mean difference was about the same in this study (1.5) as in the previous one (1.4), but the sample size is more than double. The 95% confidence interval around the difference ranged from .69 to 2.2. Because a difference of 0 is not plausible, but one as large as 2.2 is plausible, we cannot reasonably include this in a list of equivalent alternates.

In addition to using the mean, it’s common in UX research to assess data collected using multipoint scales with top-box scores. When there are five response options, both top-one (percentage of 5s) and top-two (percentage of 4s and 5s) box scores are commonly used.

Figure 2 shows the distributions of response options for the standard and alternate versions of the Usefulness item. The response patterns for the Original and Alternate 1 (functions/needs) were similar, and for each response option and the top-two box score, there was a substantial overlap of 95% confidence intervals. As in the previous study, the distribution for Alternate 2 (useful) was shifted to the right relative to the Original, resulting in a 5.4% increase in the top-box score and a 3.6% increase in the top-two box score.

Given the apparent difference in the distribution of Alternate 2 (useful) scores compared to the Original and our assumption that the various alternates we’ve been studying reflect a latent construct of Usefulness, we conducted a parallel analysis of the three versions collected in the current study. We also measured the correlations among the three versions. All correlations exceeded .90 and were highly significant. The parallel analysis indicated that the three versions were all aligned with the same underlying construct, consistent with our working hypothesis.

The replication of Alternate 2 (useful) found differences that were similar in magnitude to its earlier assessment, but with the larger sample size in this study, we found those differences (mean and top-box) to be both statistically and practically significant.

Despite the difference in response distributions for Alternate 2 (useful), correlation and parallel analysis demonstrated that all three versions have strong structural connections to the latent construct of perceived usefulness.

This replication adds more evidence to our original thinking: it’s slightly but consistently easier for people to agree that something is useful than to agree that it meets their needs.

Based on these findings and the results from our previous studies, UX practitioners can use any of the following five Usefulness items in UMUX-Lite studies. Practitioners should avoid using “{Product} is useful” due to its relative lack of measurement correspondence.

This does not mean “{Product} is useful” doesn’t have a role in assessing the usefulness of a product or interface; it just means that it’s not an adequate substitute for the original UMUX-Lite item. We’ll continue to investigate usefulness in upcoming research, and we’ll discuss this and other findings in our upcoming webinar on the UX-Lite.