“Does What I Need It to Do”: Assessing an Alternate Usefulness Item 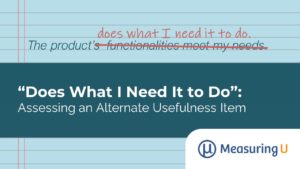 The UMUX-Lite is a two-item standardized questionnaire that, since its publication in 2013, has been adopted more and more by researchers who need a concise UX metric. Figure 1 shows the standard version with its Perceived Ease-of-Use (“{Product} is easy to use”) and Perceived Usefulness (“{Product}’s capabilities meet my requirements”) items.

Figure 1: Standard version of the UMUX-Lite.

As we continue to use the UMUX-Lite in our practice, we see opportunities to expand its reach by validating alternate forms of its Usefulness item. To date, we’ve found that the following alternates produce essentially equivalent overall UMUX-Lite scores relative to the standard Usefulness item in combination with the Ease item:

In this iteration of our ongoing study of alternate forms, we tested “{Product} does what I need it to do.” We became interested in this version because it has a different sentence structure from “meets my requirements/needs” while expressing a similar sentiment with simpler language. We wondered whether this structural change would lead to significant measurement differences or, like many of our other investigations of relatively minor wording and format manipulations, would behave like the other alternates we’ve investigated.

We included the standard version of the UMUX-Lite and a version using the alternate Usefulness item (“{Product} does what I need it to do”) as part of a survey of two types of online sellers (Mass Merchants: Amazon, Walmart, Target, Walgreens, CVS, Wayfair; Seller Marketplaces: eBay, Facebook Marketplace, Etsy, Craigslist). We conducted the survey from March through April 2021 using an online U.S.-based panel (n = 260). Respondents were randomly assigned to rate two companies using both versions of the UMUX-Lite in one of the following orders:

We used this Greco-Latin experimental design so we could focus on within-subjects comparisons of the standard and alternate versions of the UMUX-Lite.

Figure 3 shows the distributions of response options for the standard and alternate versions of the Usefulness item. The response patterns were similar, and there was a substantial overlap of 95% confidence intervals for each response option.

In addition to the mean, it’s common in UX research to assess data collected from multipoint scales with top-box scores. When there are five response options, both top-one (percentage of 5s) and top-two (percentage of 4s and 5s) box scores are commonly used.

Scale reliability, measured with coefficient alpha, was .84 for the standard version and .90 for the alternate version. These exceed the typical reliability criterion of > .70 for research metrics, supporting the use of either version.

There are two items in the standard UMUX-Lite questionnaire: (1) Perceived Ease-of-Use: “The system is easy to use” and (2) Perceived Usefulness: “The system’s capabilities meet my requirements.”

The standard wording of the Perceived Ease-of-Use item is simple and straightforward, but the standard wording of the Perceived Usefulness item, while grammatically simple, contains two infrequently used multisyllabic words—“capabilities” and “requirements.” In this and three previous studies we simplified the wording of this item. In earlier studies, we directly replaced the multisyllabic words with simpler words; in the current study, we investigated the measurement properties of a simple phrase (“does what I need it to do”), which has a sentence structure that differs from previous alternates (e.g., “meets my needs”).

These results demonstrate the practical measurement equivalence of four alternative forms of the UMUX-Lite Perceived Usefulness item. UX researchers and practitioners can use any of these alternates in place of the standard version when computing means or top-two-box scores. Pending planned replication, however, researchers should be aware of possible deviations when computing top-one-box scores with “{Product}’s functions meet my needs.”