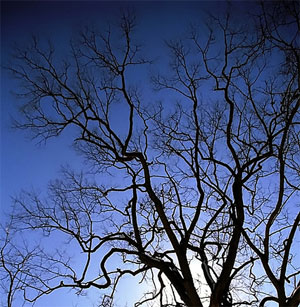 Card sorting is a popular method for understanding the mental model of the user.

Instead of organizing a website by some byzantine corporate structure, you base it on how the users think by having them sort items into categories.

It’s a method used as often as lab-based usability testing with 52% of practitioners using it in 2011.

Variations of Card Sorting have been used in psychological research for around 100 years and now most card sorts are conducted online using virtual “cards” from software like optimalworkshop.

Yet as helpful as card sorts are for understanding the users’ point of view, users don’t come to a website and sort cards– they look for products and information. To understand how easily users can find items in a taxonomy you need to have them try and find items.

For this reason I recommend conducting a follow-up tree test with a card-sort. A tree-test is just another name for a reverse card sort. Closed card-sorts have predefined categories and open card-sorts have users define their own category names.

Tree-tests present the user with a stripped-down version of the navigation so there’s no visual cues or context to aide findability—it’s just pure taxonomy.

A good time to use these two methods together is when you’re looking to improve upon a website’s navigation. First get a baseline measure of how well the current structure matches users’ mental models, identify which items are harder to find and see where users would put new items you’re looking to introduce.

For example, if a retailer wanted to introduce a line of small appliances, where do they place that category? Would users look for say sewing machines and blenders in this category? What would they call it and should it be at the top level or bottom level? Card sorting and tree-testing can help.

I hosted a webinar on July 12th with Userzoom and walked through an example using Target.com. Here are some high-level insights for conducting both a Card Sort and Tree test as well as answers to the questions from the 200 participants that joined.

Here is the procedure we used to conduct the open-card sort.

40 Items to Sort: We selected a range of what we suspected were easy and difficult items (from experience with other retailers) across a range of Target’s departments.

We recruited 50 Users: At this sample size this would give us a margin of error of around 10% around most of our metrics (with 90% confidence). We dropped two participants from the study whose sorts were haphazardly done.

It took users on average 11 minutes to sort the 40 items. We also had users select which item they thought were the most difficult to sort and why.

Based on the below dendrogram, we found 12 categories with 3 single item categories (called runts). 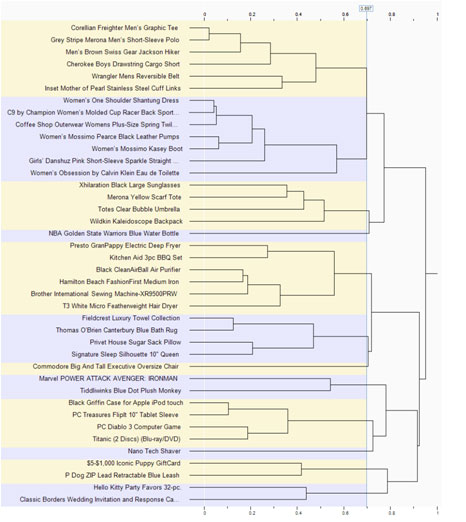 Users provided 269 unique names for the categories, many were just variations on the same name (e.g. ladies, women and men’s and men’s items) while others differed by plural form or misspelling.

We combined the similar categories to generate 44 categories. The graph below shows the percentage of participants that used the category names and 90% confidence intervals. A larger version is available on slideshare. 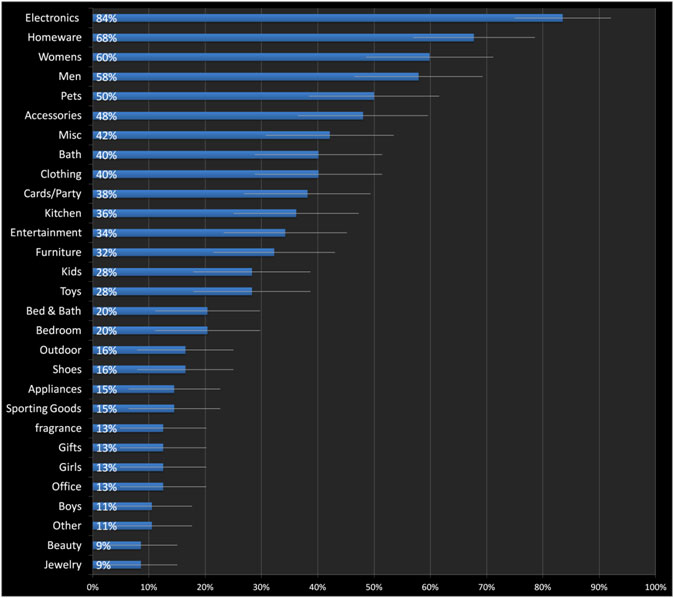 For example, 84% of participants had “Electronics” or some similarly named category in their sorted items and only 15% used “Appliances.”

We went through all 40 items and determined which categories were assigned and assessed strong and weak agreement. For example, 65% of participants assigned Black Griffin Case for Apple iPod touch into the “Electronics” category with “Entertainment” as the second choice with 15% of participants. This item showed strong agreement for placement in the Electronics category. On the other hand, the “NBA Golden State Warriors Blue Water Bottle” had low agreement with the first and second choice categories getting an equal percent of placement “Misc” and “Accessories” both at 21%. These slides are available in the webinar or on slideshare.

We also asked participants which items they found the most difficulty to sort. The graph below shows the items sorted by difficult along with the 90% confidence intervals. 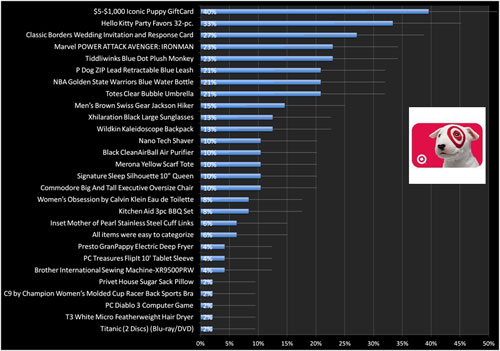 The gift card turned out to be the most difficult item to sort. We think this might be because participants were confused whether the $5-$1000 was for a puppy or if it referred to the puppy with the Target logo over its eye. A future test would use a more generic name for gift card to avoid this confusion (unless there was data that users searched for a gift card with the Target.com puppy).

Here is the procedure we used to conduct the tree-test (reverse card sort).

We selected a combination of the most difficult and easy items to sort, across a range of departments. We limited it to 14 as tree testing takes longer than card-sorting.

We recruited another 50 Users: This sample size would also give us a margin of error of around 10% around our metrics (with 90% confidence).

It took users on average 17 minutes to sort the 14 items. After users selected a category where they thought the items would be located we asked them how confident they were and how difficult they though the task was to complete.

The primary measure in a tree test is the percent of users that found the item. The graph below shows the percent of participants that successfully located each item along with the 90% confidence intervals. For example, all users found the Wrangler Men’s reversible belt while only 2% found the Wildkin Kaleidoscope backpack. 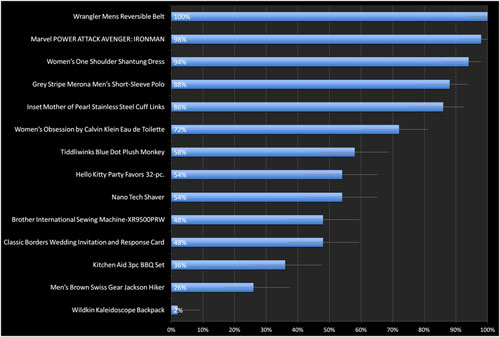 As in the open-sort, we asked participants which items they had the hardest time locating. The graph below shows the items that were most difficult to find along with the 90% confidence intervals. 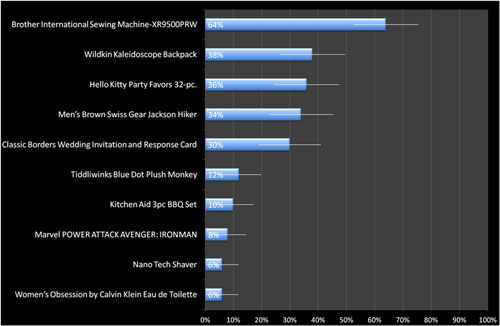 For example, 64% of participants had the hardest time finding the Brother Sewing Machine, while only 6% had a hard time finding the Nano Tech Shaver. We asked participants why they selected the items as difficult and categorized the open ended responses. For example, for the Men’s Brown Swiss Gear Jackson Hiker, most participants who had trouble were unsure if this was a boot or other article of clothing related to hiking. See the webinar for more details.

By combining the percent of participants that found the item along with how confident they were we created a four-block diagram of success and confidence. 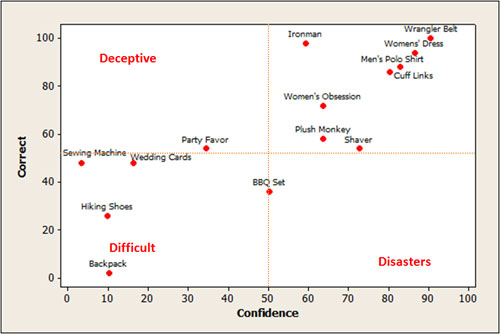 We want as many items as possible in the upper right quadrant (found and highly confident). The other three quadrants speak to some level of failure. The lower right quadrant shows “disasters,” where uses are sure this is where an item is located but in fact it isn’t. Items in these three quadrants are good candidates for either relocation or certainly cross-listing at the item page.

When we look at the overlap in the most difficult items to categorize between the open sort and tree test we can see why I recommend conducting both. The graph below shows the percent of users that selected each item as difficult depending on the test. 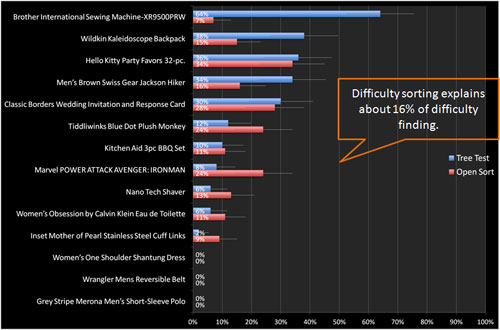 There is certainly some agreement: the Shantung dress, Men’s belt and short-sleeve polo were all relatively easy to find. But look at the Brother Sewing Machine. Only 7% of users in the open-sort identified that as difficult to sort, whereas 64% had trouble finding it in the existing navigation.

Here are answers to questions that were asked at the end of the webinar. In case you missed it you can still view a recorded version and download the slides.