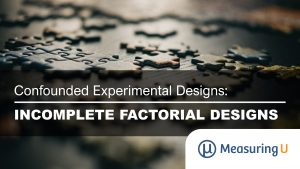 When you measure a user experience using metrics—for example, the SUPR-Q, SUS, SEQ, or completion rate—and conclude that one website or product design is good, how do you know it’s really the design that is good and not something else? While it could be due to the design, it could also be that extraneous (or nuisance) variables, such as prior experiences, brand attitudes, and recruiting practices, are confounding your findings.

A critical skill when reviewing UX research findings and published research is the ability to identify when the experimental design is confounded.

There are numerous strategies for dealing with confounding that are outside the scope of this article. In fact, it’s a topic that covers several years of graduate work in disciplines such as experimental psychology.

Our goal in this first of a series of articles is to show how to identify a specific type of confounded design in published experiments and demonstrate how their data can be reinterpreted once you’ve identified the confounding.

One of the great scientific innovations in the early 20th century was the development of the analysis of variance (ANOVA) and its use in analyzing factorial designs. A full factorial design is one that includes multiple independent variables (factors), with experimental conditions set up to obtain measurements under each combination of levels of factors. This approach allows experimenters to estimate the significance of each factor individually (main effects) and see how the different levels of the factors might behave differently in combination (interactions). This is all great when the factorial design is complete, but when it’s incomplete, it becomes impossible to untangle potential interactions among the factors.

The graph below shows hypothetical results for this imaginary experiment. There is an interaction such that the combination of large cards and large print led to a faster sort time (45 s), but all the other conditions have the same sort time (60 s). 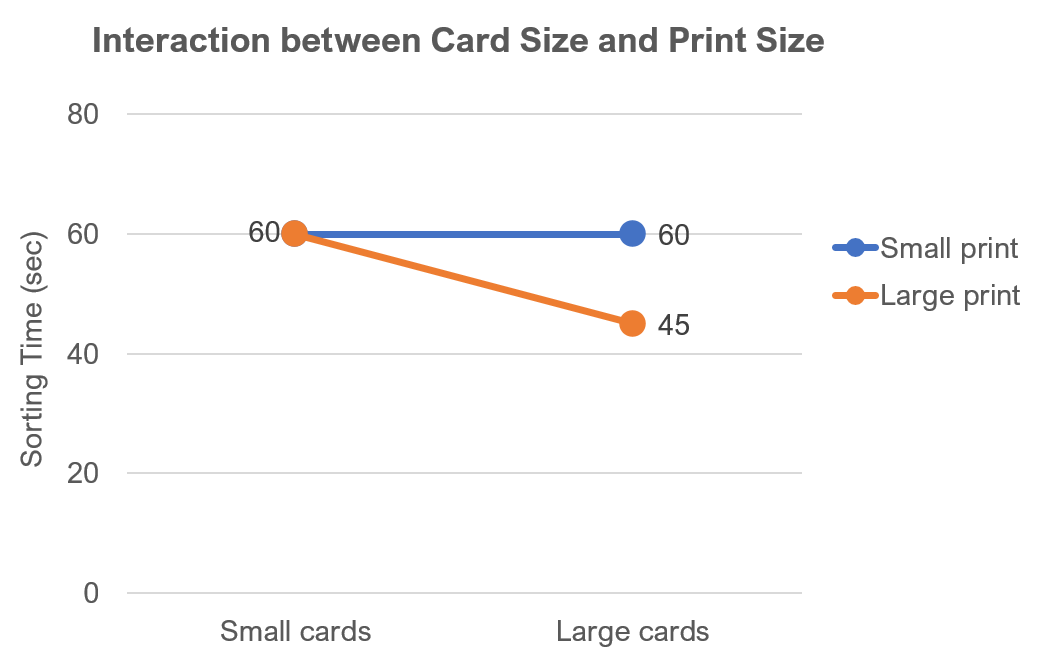 But what if for some reason the experimenter had not collected data for the small card/small print condition? If you averaged across card size, you’d get the same average as you would collapsing the data over print size, which would be (60+45)/2 = 52.5. An experimenter focused on the effect of print size might claim that the data show a benefit to larger prints, but the counterargument would be that the effect is due to card size instead. With this incomplete design, you couldn’t say with certainty whether the benefit in the large card/large print condition was due to card size, print size, or that specific combination.

Moving from hypothetical to published experiments, we first show confounding in a famous psychological study, then in a somewhat less famous but influential human factors study, and finally in UX measurement research.

In the late 1950s and early 1960s, psychologist Harry Harlow conducted a series of studies with infant rhesus monkeys, most of which would be considered unethical by modern standards. In his most famous study, infant monkeys were removed from their mothers and given access to two surrogate mothers, one made of terry cloth (providing tactile comfort but no food) and one made of wire with a milk bottle (providing food but no tactile comfort). The key finding was that the infant monkeys preferred to spend more time close to the terry cloth mother, using the wire mother only to feed. The image below shows both mothers. 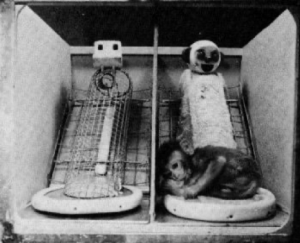 In addition to the manipulation of comfort and food, there was also a clear manipulation of the surrogate mothers’ faces. The terry cloth mother’s face was rounded and had ears, nose, big eyes, and a smile. The wire mother’s face was square and devoid of potentially friendly features. With this lack of control, it’s possible that the infants’ preference for the terry cloth mother might have been due to just tactile comfort, just the friendly face, or a combination of the two. In addition to ethical issues associated with traumatizing infant monkeys, the experiment was deeply confounded.

Typing keyboards have been around for over 100 years, and there has been a lot of research on their design—different types of keys, different key layouts, and from the 1960s through the 1990s, different keyboard configurations. Specifically, researchers conducted studies of different types of split keyboards intended to make typing more comfortable and efficient by allowing a more natural wrist posture. The first design of a split keyboard was the Klockenberg keyboard, described in his 1926 book. 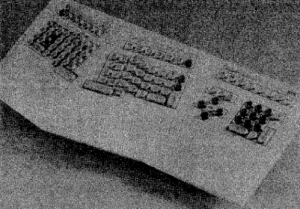 They had participants rank the keyboards by preference, with the following results:

The researchers’ primary conclusion was “After the typing tasks, about two-thirds of the subjects asserted that they preferred the split keyboard models.” This is true because 23/32 participants’ first choice was a split keyboard condition. What they failed to note was that 25/32 participants’ first choice was a keyboard condition that included a large wrist rest. If they had collected data for with a standard keyboard and small wrist rest, it would have been possible to untangle the potential interaction—but they didn’t.

Effects of Verbal Labeling and Branching in Surveys

In recent articles, we explored the effect of verbal labeling of rating scale response options; specifically, whether partial or full labeling affects the magnitude of responses, first in a literature review, and then in a designed experiment.

One of the papers in our literature review was Krosnick and Berent (1993) [pdf]. They reported the results of a series of political science studies investigating the effects of full versus partial labeling of response options and branching. In the Branching condition, questions were split into two parts, with the first part capturing the direction of the response (e.g., “Are you a Republican, Democrat, or independent?”) and the second capturing the intensity (e.g., “How strong or weak is your party affiliation?”). In the Nonbranching condition, both direction and intensity were captured in one question. The key takeaway from their abstract was, “We report eight experiments … demonstrating that fully labeled branching measures of party identification and policy attitudes are more reliable than partially labeled nonbranching measures of those attitudes. This difference seems to be attributable to the effects of both verbal labeling and branching.”

If all you read was the abstract, you’d think that full labeling was a better measurement practice than partial labeling. But when you review research, you can’t just read and accept the claims in the abstract. The figure below shows part of Table 1 from Krosnick and Berent (1993). Note that they list only three question formats. If their experimental designs had been full factorials, there would have been four. Missing from the design is the combination of partial labeling and branching. The first four studies also omitted the combination of full labeling with nonbranching, so any “significant” findings in those studies could be due to labeling or branching differences. 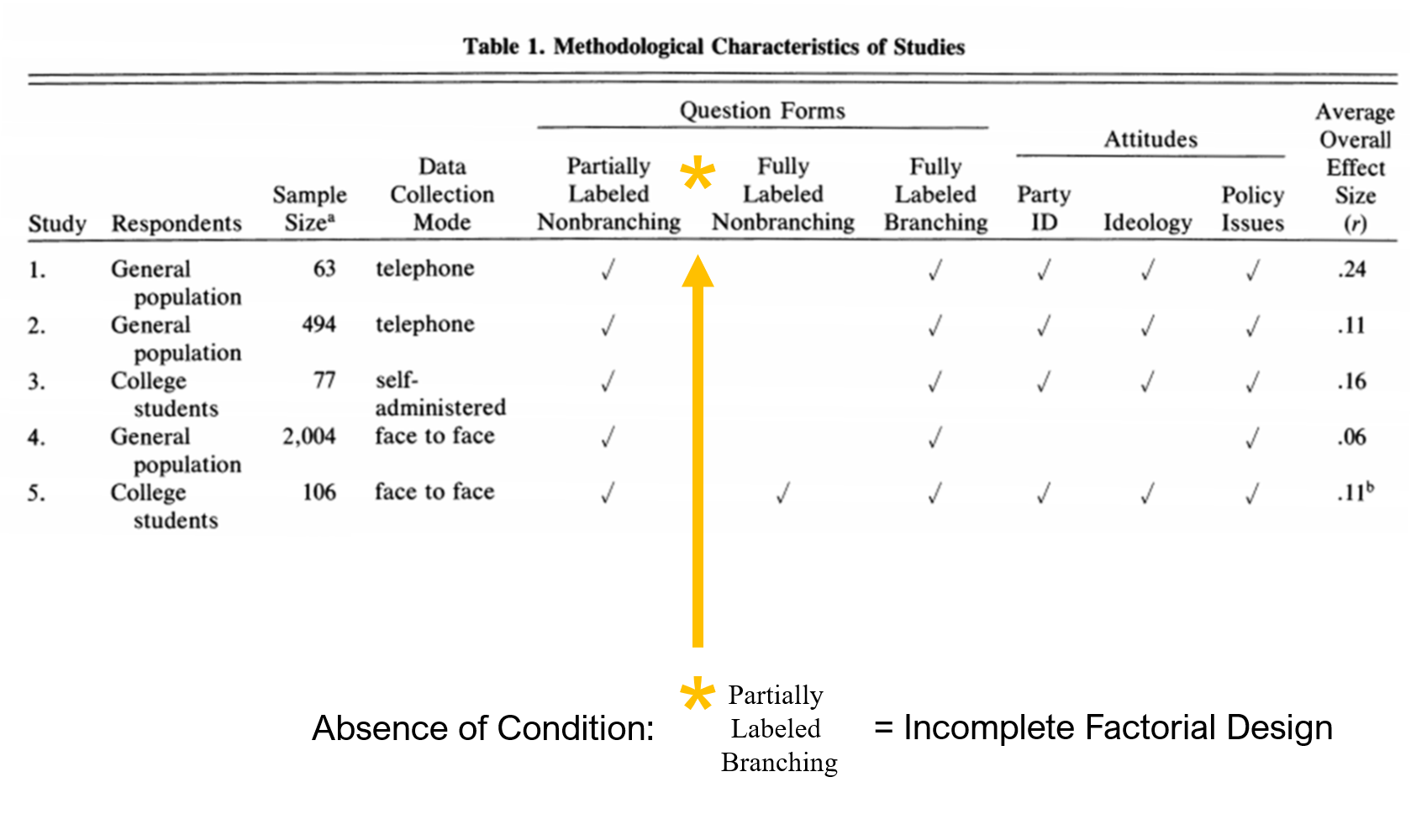 The fifth study at least included the Fully Labeled Nonbranching condition and produced the following results (numbers in cells are the percentage of respondents who gave the same answer on two different administrations of the same survey questions):

To analyze these results, Krosnick and Berent conducted two tests, one on the differences between Branching and Nonbranching holding Full Labeling constant and the second on the differences between Full and Partial Labeling holding Nonbranching constant. They concluded there was a significant effect of branching but no significant effect of labeling, bringing into question the claim they made in their abstract.

In the first hypothetical, the conclusion would be that branching is more reliable than nonbranching and labeling doesn’t matter. For the second hypothetical, the conclusion would be that there is an interaction suggesting that full labeling is better than partial, but only for branching questions and not for nonbranching. But without data for the missing cell, you just don’t know!

When reading published research, it’s important to read critically. One aspect of critical reading is to identify whether the design of the reported experiment is confounded in a way that casts doubt on the researchers’ claims.

This is not a trivial issue, and as we’ve shown, influential research has been published that has affected social policy (Harlow’s infant monkeys), product claims (split keyboards), and survey design practices (labeling and branching). But upon close and critical inspection, the experimental designs were flawed by virtue of confounding; specifically, the researchers were drawing conclusions from incomplete factorial experimental designs.

In future articles, we’ll revisit this topic from time to time with analyses of other published experiments we’ve reviewed that, unfortunately, were confounded.