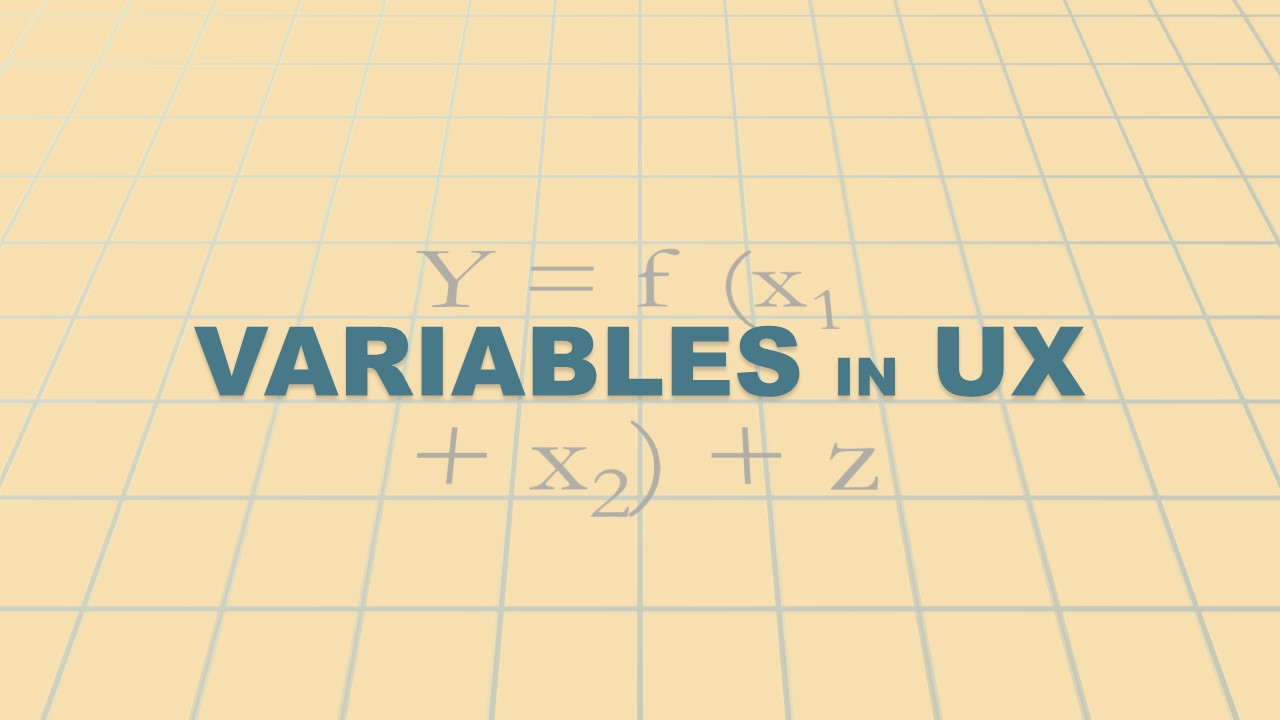 UX research pulls many terms, methods, and conventions from other fields.

Selecting a method is an important first choice in measuring the user experience. But an important next step is understanding the variables you’ll have to deal with when designing a study or drawing conclusions.

Variables are things that change. Variables can be controlled and measured.

It sounds simple enough but there are actually different types of variables and understanding the difference is one of the keys to properly interpreting your findings (and avoiding common mistakes). In this article, I’ll cover the differences between five different variables: dependent, independent, latent, observed, and extraneous/nuisance variables.

The dependent variable (often called the outcome variable) is what we hope changes when we change an interface—either through a new design or from fixing problems. Dependent variables are more easily recognized as commonly used UX metrics. For example, in usability tests with tasks, common task-level (dependent variable) metrics include completion rate, task time, and perceived ease (using the SEQ).

There’s more to the user experience than task-performance metrics. Other common dependent variables include people’s broader attitudes. Attitudes towards the brand, ease of use, trust, and appearance are also examples of dependent variables.

These attitudes are operationalized (turned into something you can measure) using questionnaires with rating scales, such as the SUS, SUPR-Q, and UMUX-Lite. Attitudes, when measured properly, can be good predictors of behavior, may explain behavior, and are often much easier to measure than behavior. For example, one of the key drivers of dating website usage and referral behavior is users’ trust in the quality of the people (and few scams) on the dating platforms.

Effective UX research links more traditional task and product metrics to higher level business metrics, such as retention rate, revenue, number of calls to customer support, and referral rates. For example, increasing trust from users on a dating website can be linked to increased time and usage on the platform and the corresponding revenue that it brings.

The independent variables are what you manipulate or change. This manipulation can be specific design changes within an interface or app, such as a redesigned form or new navigation labels. But it can also be alternative versions of the same design (version A or B), a current version and competing version, or different tasks you administer in the same study. Using the language of experimental design, we’d say independent variables have levels, one for each variation.

It can help to work through examples of how the dependent and independent variables work together.

Example 1: Sixty people who were recently researching flights online were randomly assigned to find the cheapest flight on the Delta Airlines website or the American Airlines website (30 participants on each website). The completion rate was 40% on American and 83% on Delta. All other things being equal, we can deduce that the difference in completion rates is from our manipulation of the independent variable, the website. 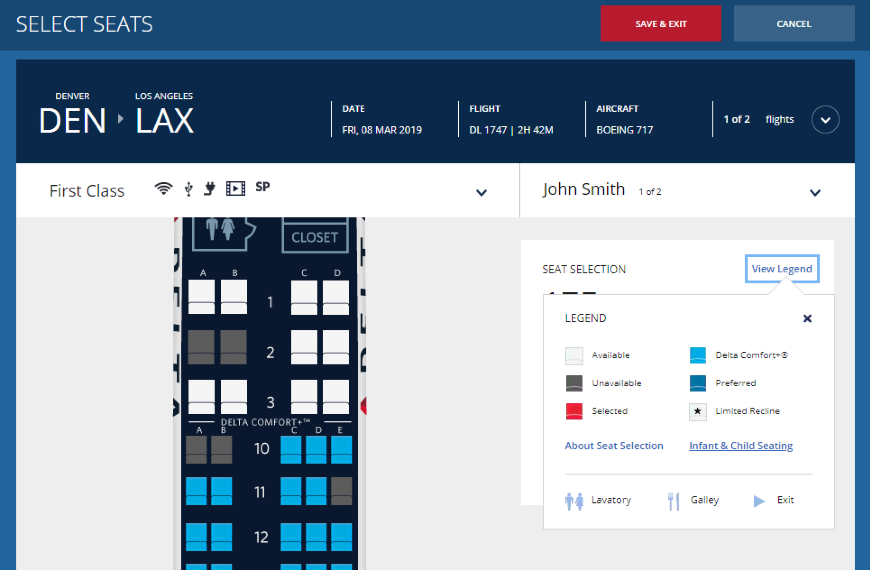 Figure 1: The seat-selector legend on the Delta website led to increased task failure.

Example 3: Fifty recent users of each of the eHarmony and PlentyOfFish dating websites rated their trust of the dating platforms using the 8-item SUPR-Q that includes two questions on trust. The trust scores for eHarmony were about average at the 54th percentile, but those for PlentyofFish were at the 5th percentile. Because SUPR-Q scores are already being compared to 150+ other websites, we can deduce that not only do current users trust eHarmony more than PlentyofFish, but they have really poor trust in PlentyofFish.

The dependent variable is made doubly meaningful by using a standardized measure (the SUPR-Q trust score) and through the independent variable showing PlentyofFish has a trust problem. But how do we know what to fix? In this case, we asked participants to tell us their concerns with the website and respondents clearly identified the high number of fraudulent profiles.

When we measure trust, as in the dating website example, or when we measure attitudes toward social media platforms, we can’t see people’s trust. There isn’t a trust X-ray machine that allows us to understand whether people trust what a company says it will (or won’t) do, or whether they trust the people on the platform. Trust, like usability or satisfaction, can’t be observed directly. You can’t see these variables; they’re hidden—or using a fancier term, they’re latent.

To measure latent variables, we have to use something we can see to make inferences about something we can’t see. To measure trust, usability, and other constructs such as satisfaction and loyalty, we typically use rating scales that are the observed variables (observed in that we can observe the responses, not the attitudes). These observed variables are more of the effects or shadows of hidden variables. We use the intercorrelations between the items and advanced statistical techniques, such as factor analysis, latent class analysis (LCA), structural equation modeling (SEM), and Rasch analysis, to be sure what we can observe is a reasonable proxy for what we can’t observe.

When I developed the SUPR-Q’s trust factor<https://digitalcommons.du.edu/etd/1166/>, we found two questions that asked about trust and credibility clustered together and differentiated well between websites that had other indicators of high trust or low trust. 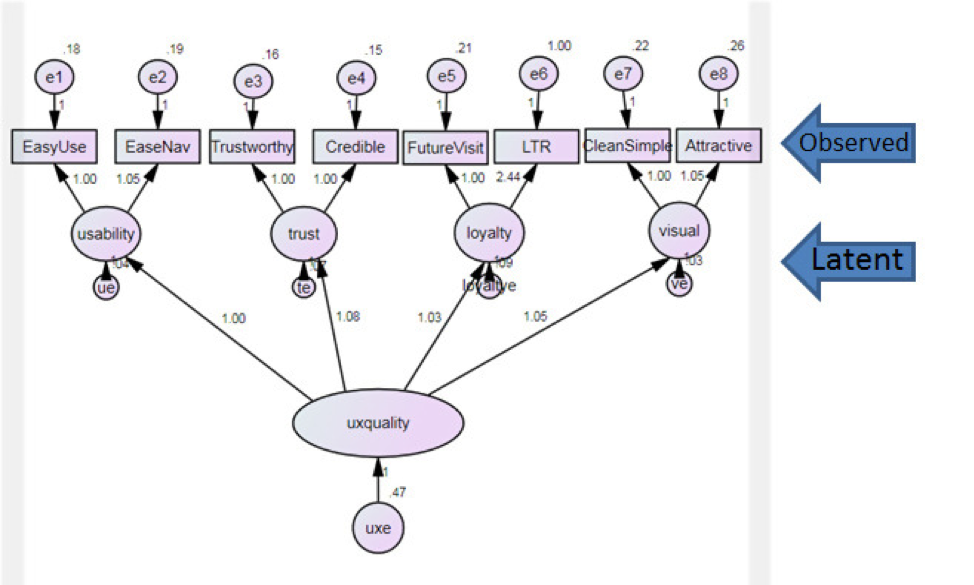 In the airline website and dating website examples above, we have good evidence that the manipulation of the independent variables (the website or task) caused the changes in the completion rate or trust scores. But other things might be causing the changes, or at least interfering, with the completion rate. For example, even though people were randomly assigned to the different airline websites, it could be that some participants had more experience on American or on Delta and this prior experience affected their completion rates.

Market and macro-economic changes can have big impacts on business metrics. For example, we recently helped a financial services company differentiate understand how changes in the stock market (a nuisance variable) affected their Net Promoter Score.

Another common extraneous variable is a sequence effect. When you administer multiple tasks to participants in a study, the prior task experience may affect (positively or negatively) performance on subsequent tasks. This may have affected the performance in the seat selector task as it was administered after finding the flight; although, if anything, it more plausibly would improve the performance as participants had more time to become familiar with the website. The sequence of tasks (first find a flight and then select a seat) while mapping what happens when people really book a flight may also cause some dependencies between the tasks. Participants who failed to find the correct flight (lowest cost and earliest arrival time) may have more trouble picking seats if the flight had fewer seats.

While you can’t get rid of extraneous variables, there are ways of handling them when you design your study (such as counterbalancing the order of tasks or websites and when drawing conclusions (such as statistically controlling for prior experience). One of the best things is to measure them, such as having a good measure of prior experience (as we did with the dating and airline studies) and changing the order in which tasks or websites are presented so you can see whether order has an effect on the dependent variables.