Does the Fidelity of a Prototype Affect Results? 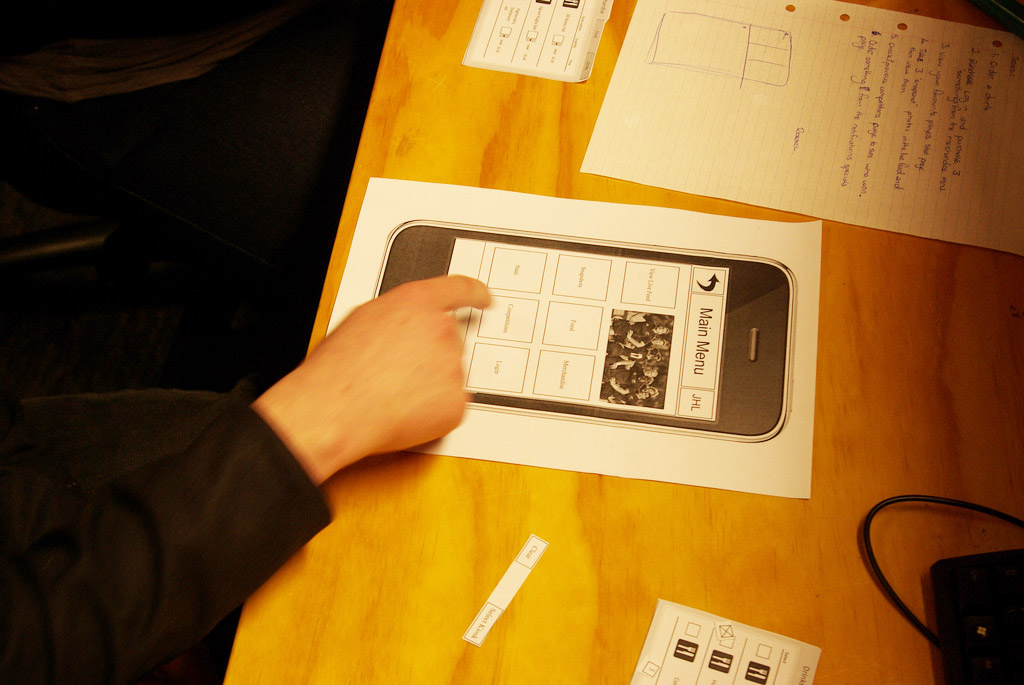 Don’t wait till you’ve built the entire app, website, or product before having people actually use it.

Build a prototype and test it.

These principles are fundamental to user-centered-design, as well as other popular concepts such as the lean startup and minimum viable products featured in the popular book Sprint.

One main advantage of paper prototypes is that they can be put together more quickly than computer-generated prototypes, and don’t require technical knowledge such as HTML and JavaScript or access to a server and hosting. While prototyping programs like InVision, Axure, and Justinmind offer the ability to rapidly prototype, and add interactivity and the right controls (especially on mobile!), it still takes skill, and in our experience, someone available to make changes quickly if something needs fixing during testing.

Paper prototypes are more than just the ugly stepchild of full-fidelity computer prototypes. Paper prototypes, often with simple black lines and sketches, convey to the user AND remind developers and stakeholders that the system is clearly under development and many changes are expected to be made.

Participants in a study with paper prototypes are more likely to assume anything can be changed and consequently may offer more suggestions. In contrast, with the higher fidelity the prototype, the more finished a product or website appears, and participants may be less amenable for suggesting changes as there’s a strong tendency not to want to hurt people’s feelings and only tell people what they want to hear.

As with many UX issues that seem contemporary due to rapidly changing technology, there’s actually a good research history on the differences between prototype fidelities that goes back more than 25 years.

The research is nuanced with studies generally showing paper and low-fidelity prototypes offering similar findings to full-fidelity prototypes and actual products, but with some caveats and limitations. Some studies even examine the effect of the medium (paper vs. computer) versus the fidelity (low vs. high). Here are some findings from published studies I’ve found in the literature.

So does the fidelity of a prototype affect results? The short answer is yes, but not as much as you’d think. Here are the nuances you should consider when testing with prototypes:

The articles I reviewed above describe prototyping on a variety of interfaces at different stages of design, including an electronic dictionary, eBook, a floor sweeper, an IVR, keyboard layout, a mobile phone (non-smartphone from 2005), Windows software, and websites. The range of products makes the conclusion across the studies more generalizable. In short, low-fidelity prototypes are reasonable, although not perfect substitutes, for high-fidelity or full products for identifying usability problems and are able to generate reliable estimates of subjective ease ratings but less accurate for task times and aesthetic measures.