How Does Did Recommend Differ from Likely to Recommend? 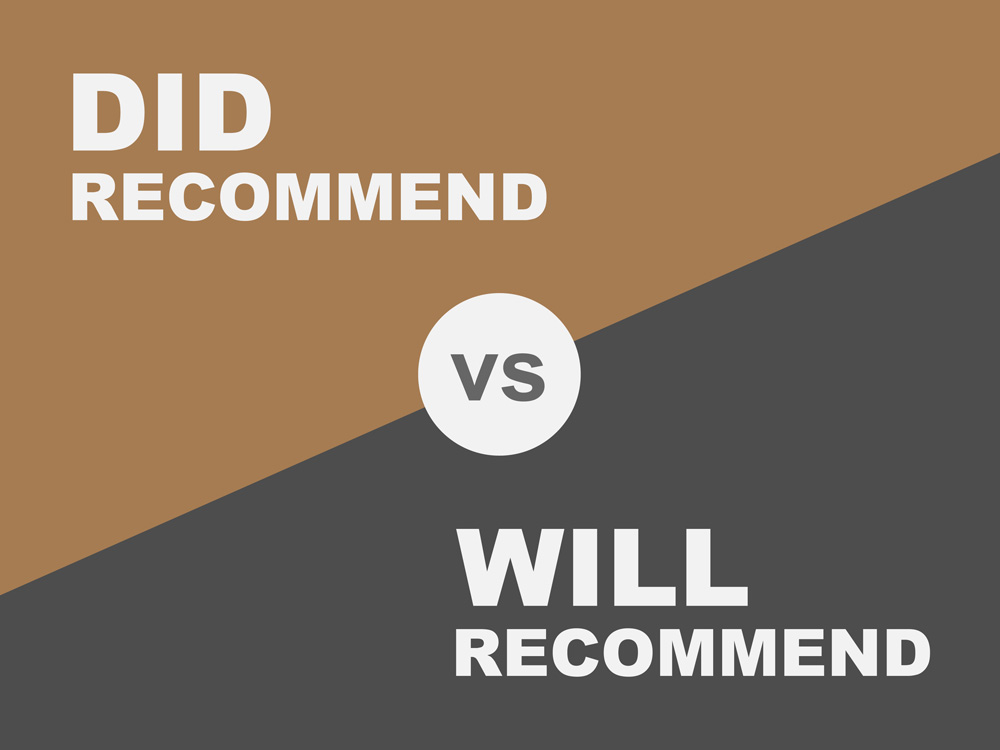 Have you recommended a product to a friend?

Will you recommend that same product to a friend again?

Which of these questions is a better indicator of whether you will actually recommend a product?

If people were consistent, rational, and honest, it’s simple. The second question asks about future intent so that would be the logical choice.

It may come as no surprise that people aren’t necessarily good predictors of their own future behavior.

How the question is phrased, along with the activity and distance in the future, each have an impact on how predictive the question is. It may, therefore be risky to heavily rely on people’s prediction of whether they WILL recommend.

We’ll look at how well-stated intentions predict future actions in a future article. In this article, we’ll examine how asking people whether they recommended something (recalling the past) differs from asking whether they will recommend (a future prediction of behavior). Are you really asking something different? If so, how do they differ and what problems arise from using only reports of past behavior to predict future behavior?

Predicting Is Hard, Especially About the Future

In theory, people should be accurate in recalling whether they did something rather than whether they will do something. With this in mind, Tomer Sharon recommends something he calls the aNPS (actual NPS)—whether people said they recommended over a recent period of time. Similarly, Jared Spool argues past recommendations are a better predictor of someone’s loyalty than asking about what people will do in the future. He uses an example from a Netflix survey to illustrate the point. Neither provides any data to support the idea that these are superior measures of future intent to recommend. (Finding data is hard.)

There is success in predicting what will happen based on what has happened, especially over short intervals and when people and things remain the same.

Recommending products or brands to friends and colleagues is likely a less stable and infrequent action. A future analysis will examine this in more detail.

Even if we have a perfect record of what people did and could exclude memory bias, change happens. People change their minds, and products and companies change (often quickly). So what people did in the past, even the recent past, may not be as good an indicator of what they will do in the future. A good example of this also comes from Netflix.

In 2011, Netflix split its mail order DVD business from its online streaming and raised prices. This angered customers (many of whom likely recently recommended the service) and Netflix lost 800,000 customers by one estimate.

We were tracking Netflix’s NPS in 2011 and this change was captured in its Net Promoter Score, which went from one of the highest in our database (73%) to a low -7% as shown in Figure 1. 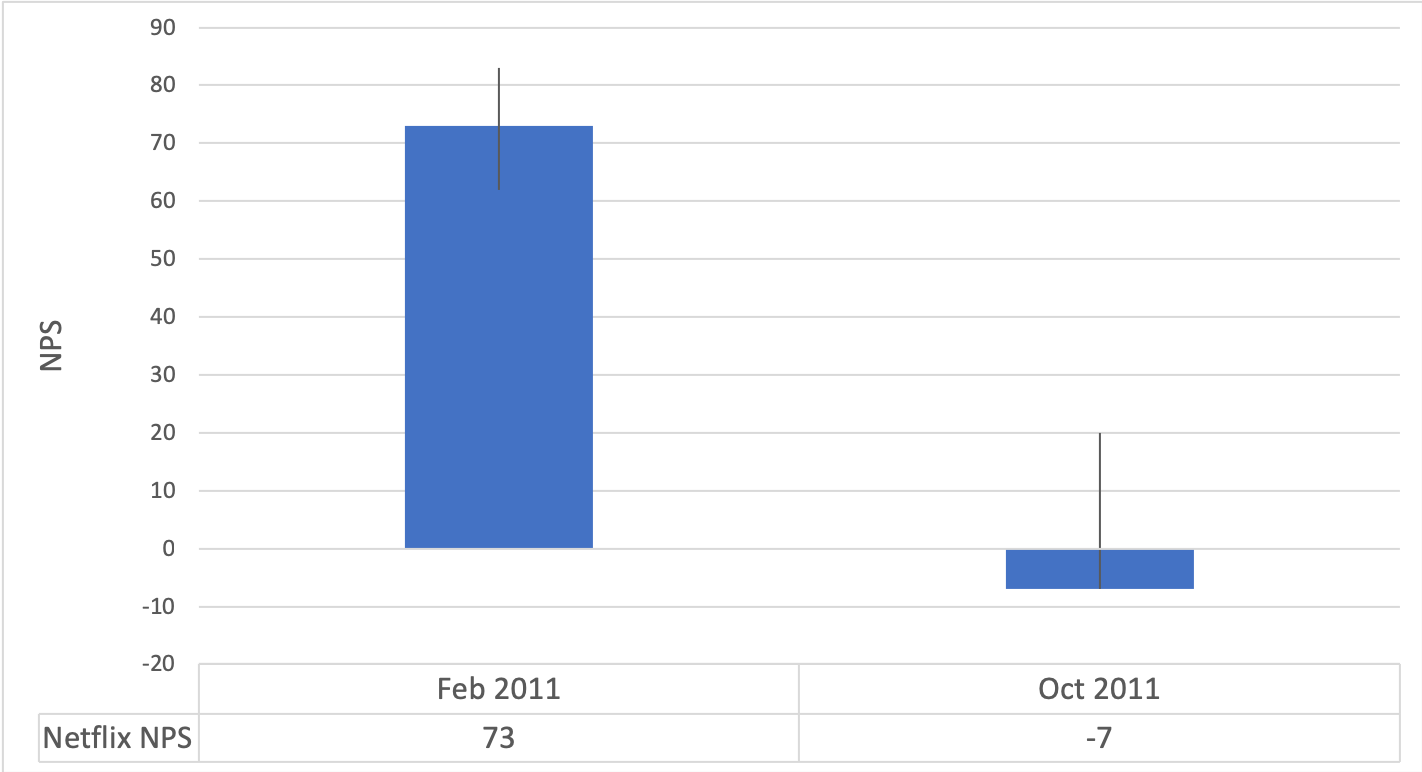 Figure 1: The Netflix NPS in Feb 2011 and Oct 2011, before and after announcing an unpopular product change.

The Netflix example shows how past recommendations (even recent ones) can quickly become poor predictors of future attitudes and behavior. Netflix ultimately reversed its decision and more than recovered its subscriber base (and NPS score).

In our 2014 consumer and business software reports, we asked current users of software products whether they recommended the product and how likely they are to recommend it in the future using the 11-point Likelihood to Recommend (LTR) item from the Net Promoter Score. We used this information to quantify the value of a promoter.

On average, 29% of software users in our study reported that they recommended the product to at least one person in the prior year. Of these past recommenders, we found 41% were most likely to recommend it again—giving a 10 on the LTR item (Figure 2). Extending this to the top two boxes we see that 64% of people who recommended are also promoters. Those who responded 8–10 on the LTR item accounted for a substantial (85%) portion of the recommendations. Including passives and promoters (7–10) accounts for almost all (93%) of the recommendations.

You can see the large drop off in recommendations between an 8 and 7 (Figure 2) where the percentage of software users reported recommending drops by more than half (from 21% to 8%) and then by half again (8% to 3%) when moving from 7 (passive) to 6 (detractor). It would be interesting to know why respondents in this study who did recommend in the past are less likely to in the future.

Figure 2: Percent of respondents who reported recommending a software product in the past and would recommend it in the future using the 0 to 10 LTR scale.

To corroborate the pattern and look for reasons why past recommendations don’t account for all future recommendations we conducted another study in November 2018 with a more diverse set of products and services. We asked 2,672 participants in an online survey to think about what product or service they most recently recommended to a friend or colleague, either online or offline. Some examples of recently recommended companies and products were:

After the first few hundred responses we noticed many people had recently recommended Amazon, so we asked respondents to think of another company. After recalling their most recent recommendation, we used the 0 to 10 LTR scale (0 = not at all likely to recommend and 10 = extremely likely) to find out how likely they would be to recommend this same product or service again to a friend.

The distribution of likelihood to recommend responses is shown in Figure 3. About half (52%) of participants selected the highest response of 10 (extremely likely) and 17% selected 9. Or, of the people who recommended a product or service in the past, 69% are promoters (Figure 4). Figure 3 also shows the bulk of values are at 8 and above, accounting for 84% of responses and another substantial drop in recommendations happens from 7 to 6 (from 8% to 2%).

Figure 3: Distribution of likelihood to recommend from 2,672 US respondents who recently recommended a product or service.

Figure 4 shows that 92% of all recommendations came from passives and promoters (almost identical to the 93% in Study 1). Across both studies around 8% of past recommenders were not very likely to recommend again. Why won’t they recommend again?

Figure 4: Percent of respondents that are promoters, passives, and detractors for products or services they reported recommending in the past (n =2672).

To find out, we asked respondents who gave 6 or below to briefly tell us why they’re now less likely to recommend in the future.

The most common reasons given were that the product or service was disappointing to them or the person they recommended it to, or it changed since they used it. Examples include:

Several respondents also didn’t feel the opportunity would come up again, supporting the idea that recommendations may be infrequent, indicating past behavior may be a poor predictor of future behavior.

In our analysis of the literature and across two studies examining past recommendations and future intent to recommend, we found:

Poor experiences cause recommendation loss. The main reason we found why people who had recommended in the past won’t in the future is that they (or the person they recommended) had a disappointing experience. This can happen from participants who had a more recent bad experience or because the product or service changed (as was the case when Netflix changed its pricing). Several participants also indicated they didn’t feel an opportunity would come up again to recommend.

Don’t dismiss future intentions. Past behavior may be a good indicator of future behavior but not universally. A meta-analysis in the psychology literature suggests stated intent has both an important moderating effect on past behavior, and in many cases is a better predictor of future behavior. We’ll investigate how this holds with product and company recommendations in a future article.

Ask both past recommendations and future intent. If you’re able, ask about both the past and future. It’s likely that people who recommended and are extremely likely to recommend again are the best predictors of who will recommend in the future. A literature review found that a combination of past behavior and future intentions may be better predictors of future behavior depending on the context and frequency of the behavior. Several participants in this study indicated that their recommendations were infrequent and despite prior recommendations may be less likely to recommend again (even though their attitude toward their experience didn’t decrease)