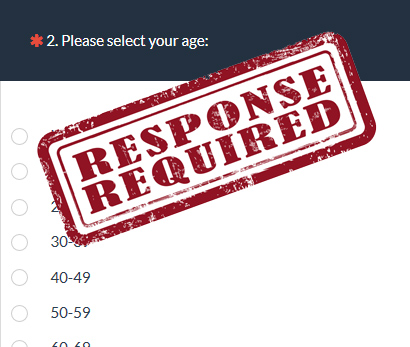 We all are bombarded with surveys asking us to provide feedback on everything from our experience on a website to our time at the grocery store.

Many of us also create surveys.

They’re an indispensable method for collecting data quickly. Done well, they can be one of the most cost effective ways to:

In addition to a method for collecting data, surveys can be viewed as a type of interface (the content and delivery). As an interface with a person on the receiving end of the questions, it makes sense to apply some HCI/usability principles to survey design.

One key usability principle is to minimize the burden on the respondent (user). Some things that make surveys a burden are:

Generally speaking, when respondents find a survey too much of a burden, you’ll pay for it in low response rates.

The obstacles you’ll likely encounter with required responses are:

Despite their drawbacks, there are good reasons to require responses.

The above pros and cons of requiring responses apply to surveys where people are asked to volunteer their time. This is often with customer surveys. But in many cases, participants are paid for their time using national panel providers or Mechanical Turk. Under these circumstances, completing the survey is essentially a job. The more questions you ask, the more you pay to get responses. Not answering questions for paid respondents is like not doing a job. You still have to consider the effects of people lying or providing erroneous answers even when you pay them though.

When participants are not part of a panel but are still compensated, or entered into a sweepstakes, you likely have more license to compel responses, but probably not as much as with paid panel participants.

In some situations, people are compelled to respond (by law or company policy). A company may require participants to answer an employee satisfaction survey. And in the US, people are required by law to answer all the questions on a census survey.

How Much Do Required Responses Affect Response Rates?

Much of the research on surveys comes from decades of paper-based surveys. One of the major differences between paper-based and electronic surveys is that with electronic surveys you can require your respondents to provide an answer before they can proceed. As such, there’s not as much in the literature on the pros and cons of mandatory responses.

Some of the arguments I’ve read for avoiding required responses is that they lead to drop out. The idea is that if respondents get too many required questions, participants abandon out of frustration. What’s unclear though is whether these same participants would abandon anyway simply from being presented with too many questions.

One study I found on the topic showed that mandatory items actually increased the response rate.

In another analysis I conducted of several factors that affected survey completion rates, the best predictor of survey abandonment was the length of the survey. The number of required fields was not a significant predictor. This is a small study so more data is needed.

Requiring responses increases the burden on the respondent, which in turn may lead to increased abandonment. The actual effect on survey completion rates is unclear and in some cases required responses may actually increase the response rate.

When compensating participants, especially with paid panel services, you likely have more license to require responses to most, if not all, questions. Required questions also have the added benefit of reducing survey length by allowing for branching and logic, as well as alerting respondents to questions they may have overlooked.

If there is one clear conclusion about required responses is that the advice that you should never have mandatory responses is overstated. Much like the notorious three clicks to content rule, there are so many exceptions that it shouldn’t be added to the survey playbook.