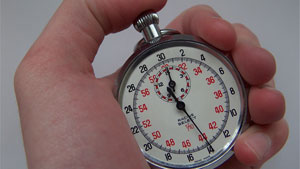 10 Things To Know About Task Times Time is a metric we all understand so it’s no wonder it’s one of the core usability metrics.

Perhaps it’s something about the precision of minutes and seconds that demands greater scrutiny.

There’s a lot to consider when measuring and analyzing task time. Here are 10 of them.

For more information on collecting and analyzing tasks times see How to Conduct a Quantitative Usability Test, also available in print from Amazon under the title a Practical Guide to Measuring Usability.