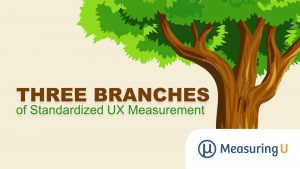 We write extensively about standardized UX metrics such as the SUS, PSSUQ, and SUPR-Q. The main benefits of standardization include improved reliability, validity, sensitivity, objectivity, quantification, economy, communication, and norms.

Even when standardized UX questionnaires are developed independently, they are influenced by earlier work, just like how UX itself is a new field built upon earlier fields.

The deep roots of questionnaire development date back over 100 years. Using an evolutionary analogy, we can place UX questionnaires on three branches, starting in the 1970s. 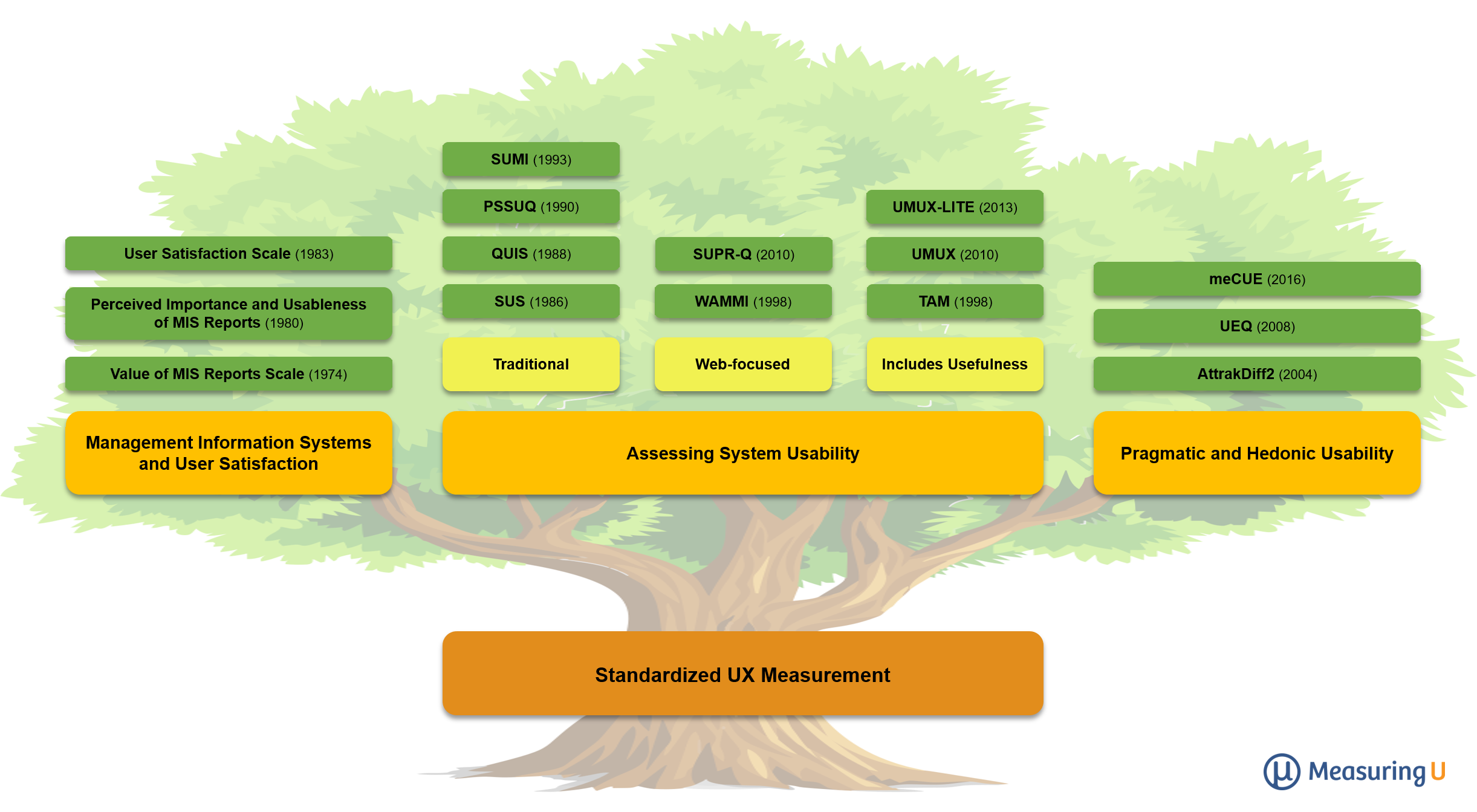 Since the mid-1970s, there have been several branches of development for standardized questionnaires that, in retrospect, have connections to the modern concept of User Experience (UX). For example, in a survey of user satisfaction scales published in 1990, LaLomia and Sidowski described the first branch that included three scales:

Other than the Pearson and Bailey user satisfaction scale, the first branch suffers from serious limitations in psychometric qualification. The first two were narrowly focused on MIS reports, and all three were created for the assessment of employee judgments of mainframe computers used in their workplace. None of them is suitable for use in scenario-based usability tests.

The second branch started in the late 1980s when, along with the emergence of personal computers and consumer software, there was an uptick in hiring human-factors engineers and experimental psychologists in the computer industry. The questionnaires in this branch were primarily intended for assessing subjective elements in usability testing, and included:

The second branch has proven to be very successful, producing standardized questionnaires that are widely used in academic and industrial usability research. Even though they were not specifically designed to focus on emotional outcomes of experience, some of their items have emotional content. For example:

The second branch included questionnaires with roots in the US (QUIS, PSSUQ) and Europe (SUS, SUMI, WAMMI), touching upon but not really focused on emotional consequences of interaction. What appears to be a third branch that more directly addresses emotional consequences has its roots firmly in Europe—specifically, Germany.

Starting in 2000, Marc Hassenzahl and colleagues began to publish research that distinguished between classical usability, which they called pragmatic usability, and hedonic usability, defined by a set of semantic differential items such as “interesting-boring” and “impressive-nondescript.” They demonstrated that both factors contribute to the appeal of a product. Since then, he has continued to conduct influential research in this area, exploring other drivers of perceived usability and developing the AttrakDiff2 questionnaire for the assessment of a variety of aspects of the user experience. Following the fundamental distinction between pragmatic and hedonic usability, other German researchers have produced similar standardized questionnaires: the User Experience Questionnaire (UEQ; Schrepp and colleagues) and the Modular Evaluation of Components of Experience (meCUE; Minge and colleagues).

The third-branch questionnaires are not yet well established in UX research or practice outside of Europe despite early translation into English (in the case of meCUE, availability in 17 languages). We anticipate increasing interest in these questionnaires, especially if future research with them includes:

The first branch produced questionnaires with relatively weak psychometric qualification and narrow focus. The second branch, which includes the well-known SUS, QUIS, PSSUQ, SUMI, TAM, WAMMI, SUPR-Q, UMUX, and UMUX-LITE, utilized stronger psychometric methods and, except for QUIS and TAM, have norms for the interpretation of their scores. The primary appeal of the third branch (AttrakDiff2, UEQ, and meCUE) is the addition of subscales that measure aspects of hedonic usability in addition to pragmatic usability. This third branch is, however, limited relative to the second in certain ways, including avoidance of specification of global measures, lack of research connecting the new measures to existing measures (e.g., SUS, Likelihood to Recommend), and, with the exception of the UEQ, lack of norms for interpreting scores.