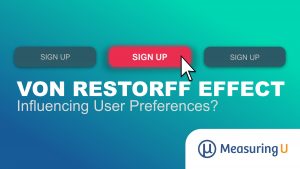 One of these things is not like the other.

That’s the theme of a segment on the long-running US TV show Sesame Street.

As children, we learn to identify similarities and differences. And after seeing a group of things that look similar, we tend to remember the differences.

Why? Well, one theory describes something called the isolation effect, or the Von Restorff effect.

The name comes from Hedwig von Restorff, a postdoc student in Berlin who worked on memory, extending the work of Ebbinghaus. (If you took a Psych 101 class, you may recall Ebbinghaus for his work on memorizing lists of random letters.) Many of her experiments used lists like the one below.

After hearing the lists above, participants would find “BYT” to be easier to remember in the isolated column than in the homogeneous column because of its distinctiveness, even though it’s in the same position.

Von Restorff herself was not a pioneer in discovering or using this method nor in studying the idea of distinctiveness or isolation (see Stigler’s Law). She used these lists in her experiments to better understand the limitations of distinctiveness and isolation effects.

If you’re in UX research, you probably aren’t deeply concerned with memory. (If you are, you’re probably trying to reduce memory burden rather than working on list memorization.) But the effects of distinctiveness and isolation both come into play when you intend for something to stand out in a design.

One example of intentionally making an element more salient (and ideally more frequently chosen) is the presentation of multiple sign-up options, such as the ones from Dropbox below. 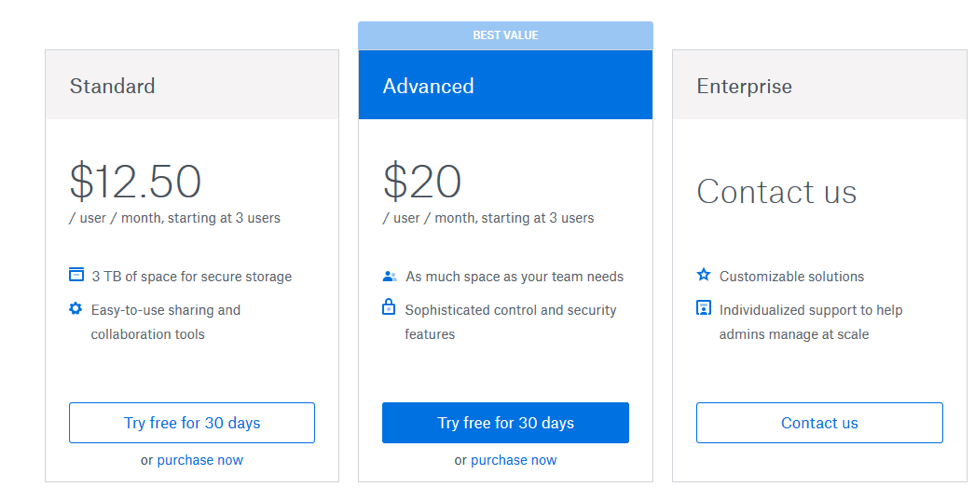 But the isolation effect also comes up where we don’t necessarily want to influence people’s choices for products and services. It might also play a role when we ask participants which design they prefer.

For example, here is an anonymized version of three early-stage prototypes we had participants use in an unmoderated study to test navigation elements. Participants first attempted tasks on all three in a within-subjects study. We collected and compared task-level measures of success rates, time, and perceived ease. At the end of the study, we showed them images of the three designs (shown below) and asked them which variation they preferred.

Which would you prefer?

Most participants preferred option C (p < .05), even though this was the version that had the worst relative performance.

Option C doesn’t have a “fat footer” so it could be perceived as “simpler” (which was a common reason given by participants). But another reason could just be the Von Restorff isolation effect. That is, Option C looks different from A or B.

Is it possible that many of the design elements selected by participants can be explained by just their distinctiveness? We conducted two studies to find out.

In September 2019, we showed 202 participants eight different sets of images (shown below). Each set consisted of three designs: two designs were similar and one was different. Differences included changes to color, size, and font. Images were shown in a random order using our MUIQ platform.

Participants were then given a short scenario and asked which design they preferred (similar to a typical UX study). For example, for row 1 in Table 1, participants were given this scenario: “Imagine you want to choose the best subscription plan for an online news platform. Which of these plan options would you prefer?”

These sets were shown as part of a larger study including questions regarding satisfaction toward mobile phones and brands. Table 1 shows the intentionally distinct element for each set in the middle (though the display was randomized for the participants). The associated scenarios are listed below the table. 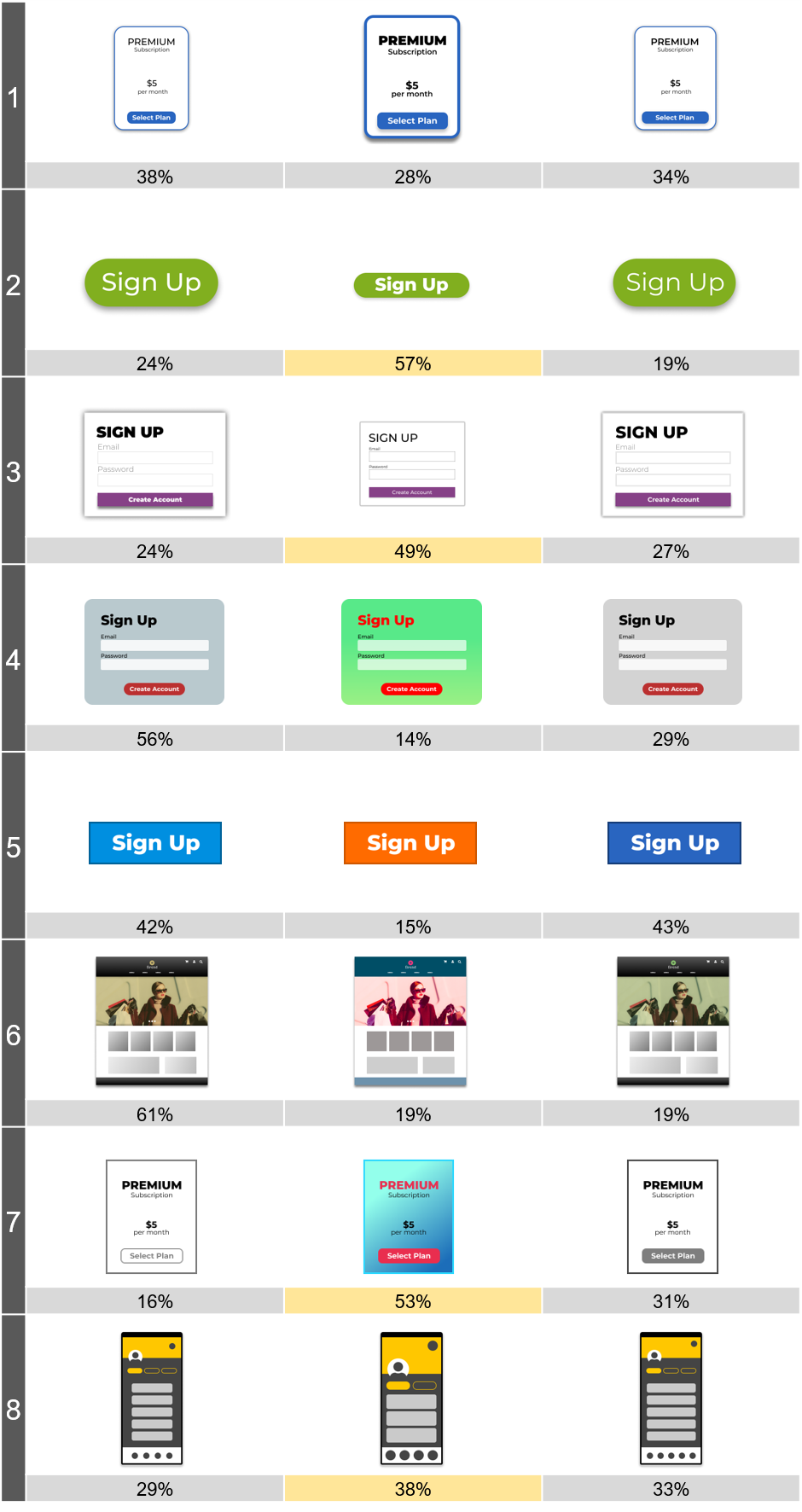 Participants selected the intentionally distinct design in only four of the eight cases, showing no statistical preference. In two of the four cases where the distinct design was selected, it was only chosen as a plurality and not by a majority of respondents (less than 50% selecting).

Despite the nonsignificant overall analysis, it’s possible that there might be interactions of interest in some portions of the data. For example, we looked at the four cases in which the distinct design wasn’t selected most, noting that the possible contributor to this reversal of the expected pattern is the use of “louder” colors. In scenarios 4 and 6, participants tended to avoid the “louder” design selections that had more vibrant colors. In scenario 5, participants also avoided the more vibrant orange button.

The results of Study 1 suggest distinctiveness alone is not enough to override preference, at least in the scenarios we presented. We conducted a follow-up study to investigate further.

Based on the results from the first round, we eliminated the more vibrant color differences and made the alternative options more similar. In October 2019, we presented 213 US-based panel participants with the same eight scenarios as we did in Study 1 using our MUIQ platform. 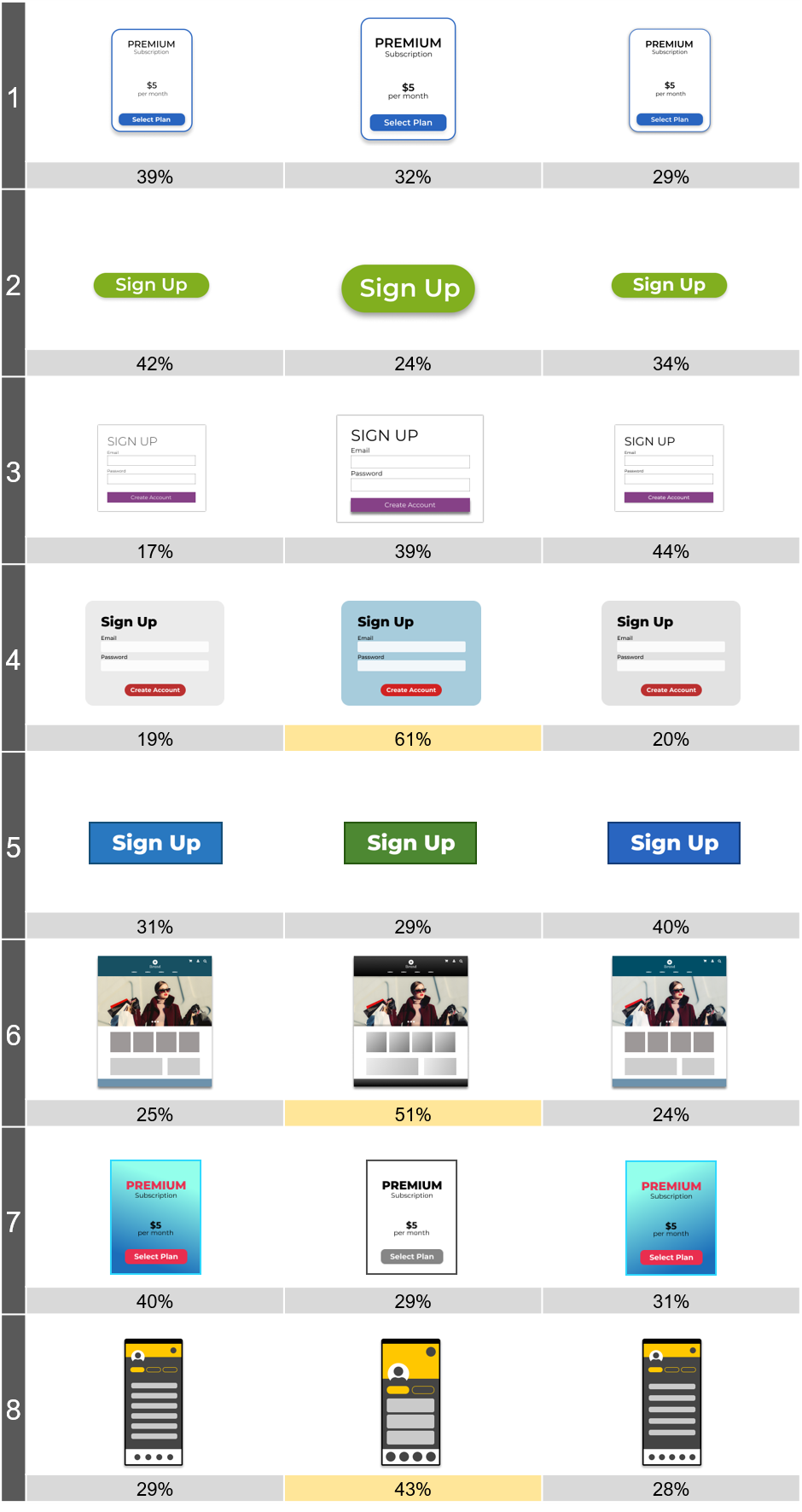 In Study 2, participants selected the intentionally distinct design in only three of the eight cases (fewer than in Study 1), also showing no statistical preference. A plurality of respondents chose the distinct design only once (43% for scenario 8).

Returning to scenarios 4 and 6, reducing the color vibrancy seemed to have the desired effect. In both cases, participants now selected the more distinct design. However, in scenario 5 participants still preferred both blue buttons over the less vibrant green button. The blue button may be a convention that participants are more familiar with (at least compared to an orange or green button).

Across two studies that investigated the Von Restorff effect, we found

Isolation alone doesn’t predict selection well. In Study 1, participants selected the most distinct design only half the time, and only two of those were selected by a majority of respondents. In Study 2, the distinct design was selected less frequently, in only three of the eight scenarios.

Preference isn’t always about isolation. These results suggest that researchers who ask preference questions about design aren’t necessarily always getting just a measure of distinctness. It’s possible that distinctiveness plays an important role in a participant’s selection, but it may be overshadowed by (or interact with) other design elements.

Design elements confound the issue. It’s possible that other aspects of a design, such as color vibrancy, density of design elements, and size play a larger role in preference than isolation. Future research can better isolate these effects.

If the Von Restorff effect exists for this type of selection, it’s elusive. By averaging across multiple types of manipulations in the two studies, it’s apparent that the selection of the distinct option was highly variable across the scenarios. Overall, there did not appear to be any consistent Von Restorff effect. It’s possible that there might be some specific conditions in which manipulation of visual design elements does consistently inhibit or increase selections of the distinct option, but detecting this would require careful and complex experimental design.

Situations were simulated but similar to UX testing. We asked participants to consider hypothetical (although common) situations when making their selections. Participants didn’t actually sign up or purchase in our study. It’s possible that testing in-situ may have different results. However, the study setup was similar to many UX research studies in which participants are asked to consider scenarios and express a preference.

It’s hard to draw conclusions about design elements. While we noticed certain manipulations to design elements (e.g., reducing the vibrancy of the color and increasing size) led to changes in preferences, it’s hard to draw generalizable conclusions from this study about recommended or not recommended design choices. Future work can examine this more.