What Statistical Test do I Use?

What do you think the most common question in statistics is?

Several times a year I teach a statistics course for UX professionals and get asked this question a lot.

We’re offering the class this fall at the LeanUX Denver conference and a portion of it is available for download.

Some attendees have had statistics classes and for others it’s their first one. Regardless of the background, almost everyone who uses statistics wants to know: What statistical procedure do I use?

It’s hard enough to grasp many of the concepts in statistics. Most people in UX aren’t math majors and never intended to use statistics as part of their job.

For this reason we have a decision tree to help you know when to use which statistical procedure in both the Excel calculator and in Chapter 2 of our book Quantifying the User Experience.

Getting to know the decision map is one of the most popular parts of the course because you can click right to the appropriate calculator after answering a couple questions, paste your data and get your answer.

I’ve included a similar clickable version below with links to several of our free online calculators. To use the decision map you just need to know a few things.

What type of Data do you have?

For this decision map, the primary thing you need to know is if your data is binary or not.

Once you’ve established whether your data is binary or continuous, you start with the appropriate decision map below. The rest is just answering a couple questions about what you’re trying to do. Four examples follow the decision maps to give you some practice.

The blue boxes at the termination points on the two decision maps below link to our free online calculator and if I don’t have one up yet (more coming soon!) it will link to the Excel calculator.

You can also download a free high-resolution printable version [3.5MB pdf] of both maps. Pin it to your wall for help or throw darts at it if statistics just frustrates you too much. 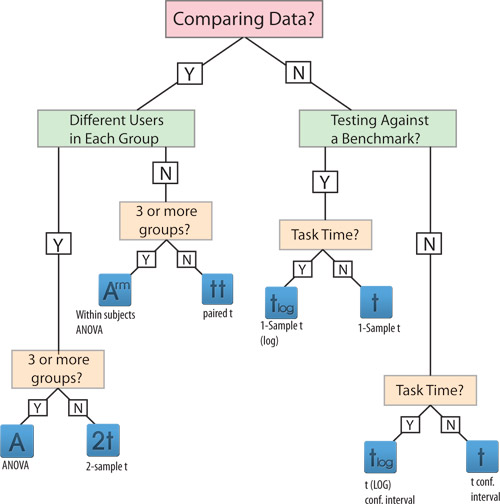 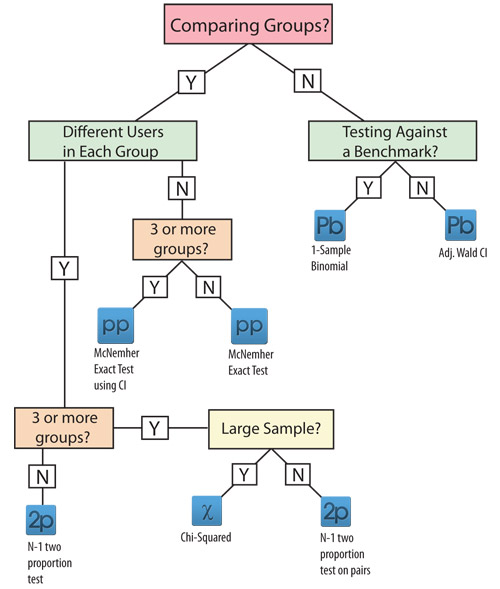 Let’s say you had a rating scale question in a survey that went from strongly disagree to strongly agree and was coded from 1 to 5 for each level of agreement. The average score was a 3.9 (sd = 1.2) from 36 people. What test would you use to find out how much that sample mean would fluctuate?

Let’s say you watched as 20 out of 25 people found a Brother Sewing Machine in a tree test from Optimal Workshop. Is there evidence that at least 75% of all users would find the Sewing Machine?

Let’s say you administered the System Usability Scale (SUS) after users spent time using an accounting application. You tested 15 users on an old version and 17 on a new version and wanted to know if there was evidence that users thought the new version was easier to user. The SUS means and standard deviations were 68 (sd=14) and 76 (sd =12) on the respective versions.