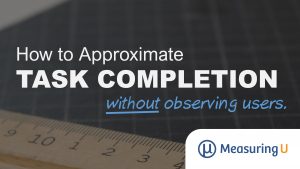 If users can’t complete a task, not much else matters.

Consequently, task completion is one of the fundamental UX measures and one of the most commonly collected metrics, even in small-sample formative studies and studies of low-fidelity prototypes.

Task completion is usually easy to collect, and it’s easy to understand and communicate. It’s typically coded as a binary measure (success or fail) dependent on a participant meeting a predetermined success state.

But determining if a task has been completed successfully depends on the data collection method. In some cases, it’s not feasible to collect actual task-completion data, but all is not lost. First, we’ll review how task success is assessed in moderated and unmoderated studies, and then we’ll provide some guidance on how to approximate it when it can’t be collected.

While in-person moderated studies have mostly stopped because of the pandemic, moderated remote studies are still possible. For both in-person and remote moderated studies, task success can usually easily be observed by a facilitator or note taker. For example, success may be observed when a blender is added to a cart on a retail website, when an ad is posted using a Google AdWords account, or when an expense report is properly posted with the correct amounts using an enterprise accounting program.

Even in unmoderated studies, you may still be able to observe success states from screen recordings (such as in our MUIQ platform). This can get rather time-consuming for large-sample-sized benchmarks, though (we’ve watched A LOT of recordings for some studies!), but it’s at least still feasible to determine whether the success state was achieved.

If you lack screen recordings (or don’t want to rely on them) in your unmoderated study, it’s still possible to derive task completion. The two most common methods for unmoderated studies are:

2. URL validation using the location of one or more target URLs

A retrospective study asks participants to recall their most recent experience, after which they answer questions using many of the same metrics as a task-based unmoderated study uses. By definition there are no tasks for these types of studies, so you can’t observe a success state. Instead, you can ask participants about tasks they’ve attempted and have them self-report a completion rate. However, we’ve found that self-reported task-completion rates are almost three times higher than verified completion rates.

The relative rank of products does seem to be reasonably well predicted (if you have conducted a comparative study), but this approach doesn’t seem to be a good proxy for actual completion rates.

Instead of asking task completion directly, an alternative is to estimate the completion rates from other self-reported metrics at the task and study level using the Single Ease Question (SEQ) and System Usability Scale (SUS) respectively.

We have found that post-task measurement of ease using the SEQ correlates highly (r = .66) with concurrently collected task-completion rates. The relatively high correlation means we can use the SEQ to predict completion rates with reasonable (although not perfect) accuracy.

Figure 1: The relationship between SEQ scores (converted into deciles) and completion rates for 286 tasks.

To estimate task-completion rates this way, you can provide participants with a task and a specific scenario. For example, thinking about the last time you paid a bill online, how easy or difficult was the task?

Keep in mind that we haven’t verified whether the relationship between the SEQ and completion rates would remain if we weren’t collecting both during a task scenario. We have no a priori reason to believe the relationship would be radically different, but it would be reasonable to examine this in future research.

We found a similarly strong relationship with SUS scores and completion rates. SUS is typically collected only once, at the end of a study. Consequently, to have a correlation with task-completion rates, the completion rates need to be averaged together from all tasks.

Completion rates are a fundamental usability metric in assessing the effectiveness of an experience. Collecting completion rates is relatively straightforward when you can observe the success state (in moderated and unmoderated studies).

When you can’t observe a success state in an unmoderated task-based study, you can use a post-task verification question or URL tracking. Asking self-reported completion rates (did you complete this task?) tends to result in highly inflated scores. An alternative is to use measures of perceived usability: The post-task SEQ average can approximate individual task-completion rates, and the SUS can approximate the average completion rate across multiple tasks. Future research is needed to see how well the SEQ and SUS predict tasks when they aren’t collected as part of a usability test.