Despite the attention consumer-based mobile apps, websites, and software get, a lot of the world depends on business software.

Along with features and capabilities, the user experience of software is a key determinant of how likely users adopt new technology and recommend the product.

Benchmarking is an essential step in a UX measurement plan, and helps designers make systematic improvements in a product’s user experience.

In the latter part of 2016 and beginning of 2017 we collected data from 1,048 participants to learn about their attitudes toward the functionality and usability of common business-related software. Measuring user attitudes toward the experience is an important step in benchmarking and improving a product.

The 13 business products include a mix of productivity and communications software (both web and desktop):

Participants came from the United States. A bit over half (55%) were male and tended to be older with 76% above 30. Participants were asked to reflect on their most recent experiences with the software and answer a number of items, including the System Usability Scale (SUS) questionnaire and the likelihood-to-recommend question (used to compute the NPS). The full details are available in the report. Here are some highlights.

The most popular method to measure loyalty is the Net Promoter Score. It’s calculated using the 11-point (0 to 10) likelihood-to-recommend question. It’s computed by subtracting the percent of detractors (0-6) from the percent of promoters (9-10).

Across the 13 products the average Net Promoter Score is -11% with a range of -36% to 17%. This average is lower than the average NPS scores from 2014 and 2011 because we’ve excluded the consumer products.

We have data from five business software products for multiple years. The biggest drop we observed was from AutoCAD that had an NPS of -36%, down from 34 from 2011. The major reason cited for detracting is likely its steep learning curve and competition from other entrants.

“This software is outdated and difficult to use.”

“I feel like Rhino does the same capabilities as AutoCAD but a bit better with more options.” 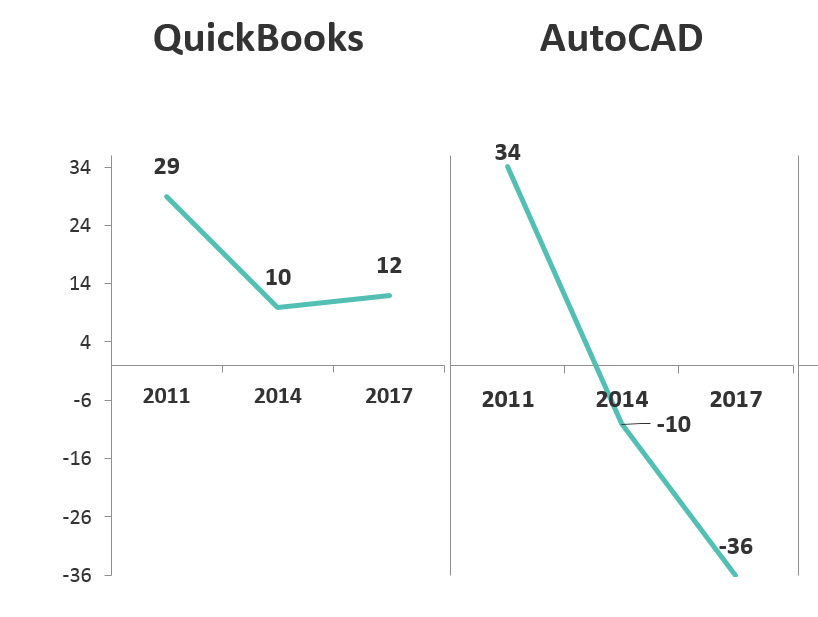 In addition to the NPS, we also captured metrics that help build a more holistic picture of customer loyalty and the potential impact of word-of-mouth. These include:

Raw SUS scores were converted to percentile ranks, which translated the average raw score into 44%—meaning this group of products scores slightly below average in perceived usability.

The product with the lowest SUS score in this dataset is Tableau, with a SUS score of 56 (at the 21st percentile). What’s interesting is that Tableau is largely intended to make visualizing data and using spreadsheets easier. One participant commented:

“While Tableau can be a great tool to use for data analytics, it takes some time to learn all of its functions and to apply it to the appropriate work space.”

The SUS scores for the five products from the previous reports had relatively stable SUS scores fluctuating by only around 1 point, with the exception of Salesforce, which saw a decline of 5 points from 2014 (67 to 62). One participant’s reason for being a detractor exemplifies the correlation between ease of use and NPS:

“[Salesforce] is extremely complicated to use. There are a ton of nuances that you wouldn’t know unless you had extensive training and had someone to ask questions every time you needed to do something that you haven’t done before. I don’t like the way the pages are laid out either…they don’t appear organized.”

This year, we began to report on a new measure, UMUX-LITE. It’s based on earlier work harkening back to the Technology Acceptance Model  (TAM) but includes only one item each for ease (how easy is the software to use) and usefulness (how well the capabilities meet the users’ needs).

In aggregate, it provides a measure of acceptance or even more broadly satisfaction or quality of the product. Figure 2 shows a scatterplot of the normalized version of the two components of the UMUX-Lite scores. All the software products are rated above average for usefulness but most below average for usability.

We’ll continue to collect UMUX-LITE scores as it’s become an important benchmark for many organizations as part of using a single (succinct) score to quantify software acceptance and satisfaction.

We’ve again seen the strong correlation between usability and loyalty (r = .63) when correlated at the product level [pdf]. That means SUS scores here explain (predict) around 40% of Net Promoter Scores with this type of software.

Illustrating this strong correlation, Figure 3 shows the SUS scores for detractors, passives, and promoters (computed at the individual level for all responses).

Benchmarking is an important step in improving the user experience of software and should include measures of usability and loyalty. Third-party benchmarks like the ones described here complement internal benchmarking programs by providing more context. It’s a lot easier to know how well your product is doing if you know where it stands relative to the competition or the industry average.

The full list of benchmarks and select verbatim responses are available for purchase in the Net Promoter & UX Benchmark Report for Business Software (2017).