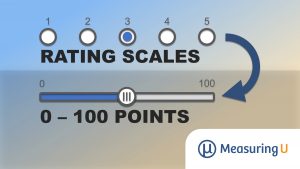 There are a lot of ways to display multipoint rating scales by varying the number of points (e.g., 5, 7, 11) and by labeling or not labeling those points.

There’s variety not only in how rating scales are displayed but also in how you score the responses. Two typical scoring methods we discussed earlier are reporting the raw mean of responses and using top-box scoring.

But there are many different types of rating scales, and it would be handy to have a general strategy for comparing them; for example:

An alternative way to handle both reporting rating scale data and interpreting different point scales is by converting scores to fall on a scale from 0 to 100 (technically a 101-point scale), something done with the popular System Usability Scale (SUS).

Developed in the mid-1980s, the SUS is a popular measure of perceived usability for UX practitioners and researchers. According to Google Scholar, the original SUS paper (Brooke, 1996) has been cited over 9000 times, and that only accounts for its use in published research. The standard SUS is made up of ten five-point mixed-tone items and produces scores that can range from 0 (worst) to 100 (best).

Because the tone of the items in the standard SUS is mixed—half positive (odd items) and half negative (even items)—the first step in scoring the SUS by hand is to convert all the items to the same scale. For positive-tone items, subtract 1 from the item rating. For negative-tone items, subtract the item rating from 5. This converts all raw ratings to a nonstandard five-point scale ranging from 0 (poorest rating) to 4 (best rating). For example, a positive-tone rating of 5 becomes 4, and 1 becomes 0. A negative-tone rating of 5 becomes 0, and 1 becomes 4.

Adding the scores would produce a scale that would range from 0 to 40 in one-point increments. To stretch it out from 0 to 100, multiply the sum by 2.5, which is the value you get after dividing the target maximum of 100 by the unadjusted maximum of 40.

In his 2013 retrospective on the SUS, Brooke (2013, p. 35) recalled the rationale for making these adjustments:

But why is there the rigmarole around converting the scores to be between 0 and 4, then multiplying everything by 2.5? This was a marketing strategy within DEC, rather than anything scientific. Project managers, product managers, and engineers were more likely to understand a scale that went from 0 to 100 than one that went from 10 to 50, and the important thing was to be able to grab their attention in the short space of time they were likely to spend thinking about usability, without having to go into a detailed explanation. (Also, where differences in perceived usability were achieved, having a scale of 0 to 100 was likely to make the differences be perceived by team members as being greater than on a smaller scale—not that it makes any difference when it came to actual analysis.)

In short, there are some practical advantages to presenting attitudinal data on a 0–100-point scale where 0 is the worst possible outcome and 100 is the best.

If the initial scale starts with 0, like the standard eleven-point likelihood-to-recommend item used to compute Net Promoter Scores, all you need to do is divide the rating by the highest possible value and multiply by 100.

What If 0 Is in the Middle?

What If the Scales Are Reversed?

Sometimes it’s necessary to reverse scales to bring them into correspondence with other scales. This can happen when lower numbers are assigned to higher levels of the attribute of interest (e.g., assigning 1 to “Strongly agree” in the Post-Study System Usability Questionnaire) or when there is a mix of positive- and negative-tone items (e.g., the System Usability Scale). If this is the case, you’ll need to reverse the scale. This is simple when the scale starts at 0—just subtract the rating from the highest possible rating (e.g., a rating of 0 on a 0–10-point scale reverses to a 10, a rating of 10 becomes a 0, and the midpoint rating of 5 stays a 5).

Because UX researchers encounter many different item scales, it’s important to have a general strategy for converting them to a common scale for comparison rather than having an infinite number of rules for each specific case. We recommend conversion to a common scale that ranges from 0 to 100, similar to the SUS.

When the original scale starts at 0, stretch its ratings by multiplying it by 100 divided by the maximum value of the unadjusted scale.

When 0 is the midpoint, add enough to the response options to make the lowest value 0, and then convert to 0–100 points (multiply by 100 divided by the new maximum unstretched value).

It may sometimes be necessary to reverse scales before conversion. To reverse a scale that starts with 0 or 1, subtract the rating from the maximum value of the scale. For scales with a midpoint of 0, start by adding enough to the response options so it starts at 0, and then reverse it and stretch it to 100.