Does the Net Promoter Score Predict Recommendations? An Analysis of Online Grocery Behavior 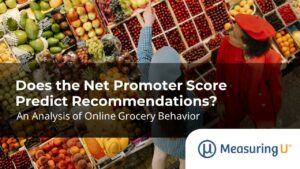 For publicly traded companies, it’s not enough to be profitable—you must grow your profits. And growth is often driven by acquiring new customers while retaining existing ones.

Much of the allure of the Net Promoter Score is its touted ability to be a leading indicator of growth or a harbinger of receding growth. This is done by measuring people’s intention to recommend companies and using that likelihood-to-recommend rating to classify them as promoters, passives, or detractors. Word of mouth is a powerful driver of purchasing behavior. How people pick a realtor, an accountant, or a movie to watch is often influenced by recommendations from friends and colleagues.

But one of the early criticisms of the validation of the Net Promoter Score’s ability to predict company growth was that its author, Fred Reichheld, correlated NPS data with historical data and not future growth data. Since then, we have replicated some of his findings and found at least modest future predictive abilities of the NPS in 11 out of 14 industries (average correlation of .35).

In our analysis of the published NPS literature, we found a dearth of data at the individual level—that is, few researchers were tracking recommendations and following up with the same people (a longitudinal analysis). We needed a longitudinal dataset—one that had individual attitudinal and behavioral intention data that preceded individual behavioral data.

To measure the predictive validity of the likelihood-to-recommend (LTR) item and the Net Promoter Score (NPS), we analyzed data collected over a two-month period in the online grocery industry in the U.S.

We asked participants to rate the overall quality of the user experience of the online grocery service they used the most with the SUPR-Q® and UX-Lite® (see “UX and Net Promoter Benchmarks of Grocery Websites” for analytical details and results). Participants also completed the eleven-point LTR item used to compute the NPS (Figure 1).

We received a total of 320 usable responses for the follow-up study, an impressively high 82% follow-up rate. In addition to its simplicity, the NPS is popular due to the expectation that a higher LTR should be positively correlated with actual recommendations.

We analyzed the LTR and NPS relationships with reported follow-up recommendations, first at the overall service level (eight brands) and then at the individual level (320 respondents).

With only eight services, our analysis options are limited to correlation. Only very large correlations (greater than .708) would pass the standard criterion for statistical significance (p < .05). At the service level, we’re looking for broad indicators consistent with positive relationships between the LTR and NPS with reported recommendation rates.

Relative to analysis at the service level, we expected correlations at the individual level to be lower (because there’s less variability when data are aggregated), but because the sample size is much larger (n = 320), statistical significance of relationships can be established with smaller correlations (e.g., when r = .092, p = .10; when r = .11, p = .05; when r = .144, p = .01). At the individual level, we can also examine nonlinear relationships by comparing recommendation percentages for each NPS category (detractors, passives, and promoters).

Figure 3 shows that over half of promoters (58%) reported having recommended the grocery service to someone in the last month—just over four times the recommendation rate of detractors (14%).

The results in the previous section demonstrate a significant relationship between likelihood-to-recommend and follow-up rates of self-reported recommendation behaviors.

Because behavioral intentions are usually correlated with one another, we also investigated the relationships between LTR and NPS with three different self-reported shopping behaviors (purchase rates, number of purchases, and purchase amounts).

Table 1 shows the correlations between LTR and NPS with the three self-reported purchase metrics over the past month. As expected, the correlations for LTR were like those for NPS (same rank order in the table), with LTR slightly higher than NPS.

Table 1: Correlations between LTR/NPS and purchase metrics at the overall service level.

For example, consider the scatterplot for NPS and purchase amount shown in Figure 4. The scatterplot indicates that Whole Foods is an outlier with the lowest amount spent (less of an outlier than it was when analyzing these relationships with SUPR-Q data, but still an outlier). Recalculating the correlation without Whole Foods would result in a statistically significant correlation of .71 (R2 = .51, p < .05). We need to be cautious about ignoring data when there is such a small sample size (avoiding cherry-picking), but this shows how one outlier in the analysis of a fairly small number of services can reduce estimates of linear correlation. This outcome raises questions for future research on why Whole Foods customers reported lower spending than the other services.

Table 2 shows the correlations between LTR and NPS with self-reported recommendation rates and three self-reported purchase metrics over the past month (purchase rates, number of purchases, and purchase amount).

Table 2: Correlations between LTR/NPS and purchase metrics at the individual level (all p < .01).

All correlations were positive and significant (p < .01). Using Cohen’s (1988) guidelines for interpreting the magnitudes of correlations (.10 is small; .30 is medium; .50 is large), the LTR/NPS correlations with purchase behaviors were between small and medium.

Here are our key findings, study limitations, and main takeaway.

The relationships with LTR were nonlinear. As we saw in similar earlier analyses, there was a nonlinear relationship between LTR and future reported behavior, demonstrated through analysis of those behaviors by each NPS category (detractor, passive, promoter).

Range restriction may have attenuated correlation. Another characteristic of the data is that the LTR/NPS metrics tended to be high (average NPS of 19%). These generally high NPS ratings may have led to a restricted range (which can artificially reduce the magnitudes of correlations).

NPS promoters are not only more likely to recommend but also to shop more frequently and spend more. Relative to detractors, promoters were four times more likely to report recommending, had a 21% higher shopping rate, reported making 33% more purchases, and estimated spending 57% more. Enterprises should strive to keep their promoters happy and, in general, avoid making any customers unhappy.