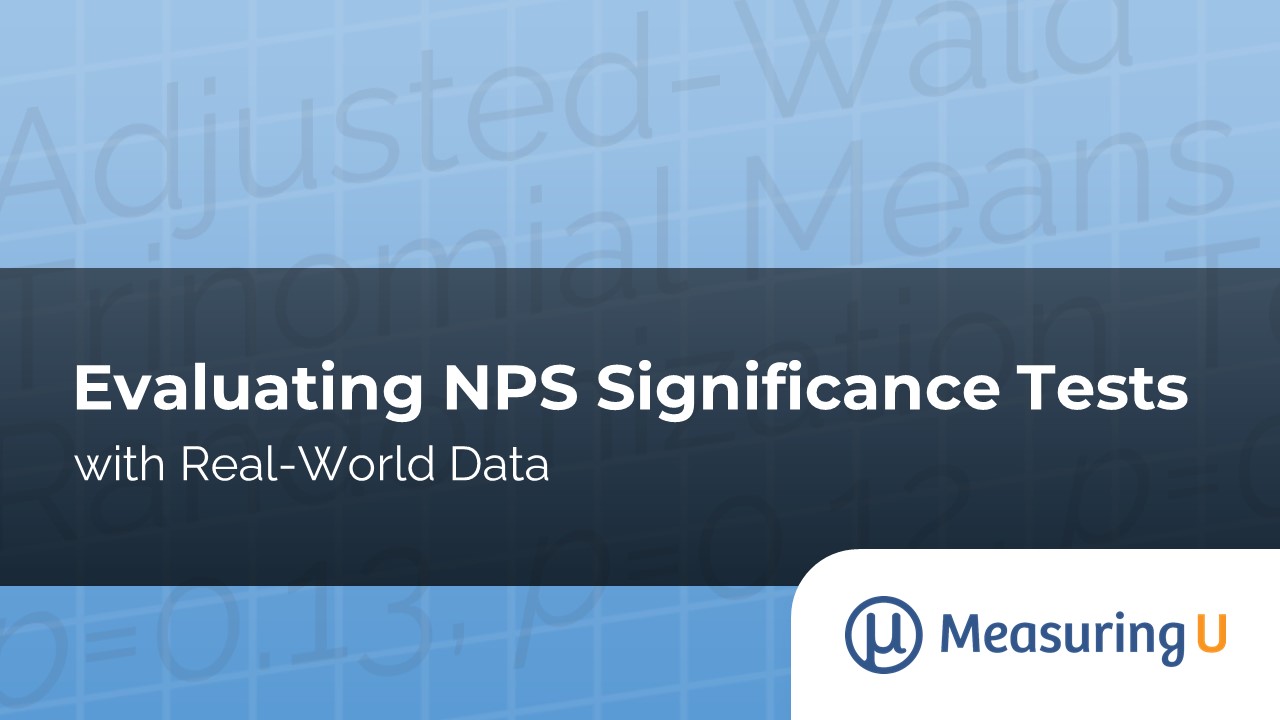 The Net Promoter Score (NPS) is widely used by organizations. It’s often used to make high-stakes decisions on whether a brand, product, or service has improved or declined.

Net Promoter Scores are often tracked on dashboards, and any changes (for better or worse) can have significant consequences: adding or removing features, redirecting budgets, even impacting employee bonuses. Random sampling error, however, can often explain many of the changes in Net Promoter Scores, and organizations don’t want to be fooled by randomness. Two approaches to help differentiate the signal (meaningful changes) from the noise of sampling error are confidence intervals and significance tests.

We recently described three methods for computing confidence intervals for Net Promoter Scores. (For full computational details, see “Confidence Intervals for Net Promoter Scores.”) One was based on adjusted-Wald estimates, one was based on trinomial means, and one used bootstrapping. The adjusted-Wald method had accurate coverage and—especially for smaller sample sizes—produced more precise (narrower) intervals.

After completing our research on NPS confidence intervals, we worked out a method for testing the statistical significance of the difference between two NPS datasets based on the formula for the adjusted-Wald confidence interval. (For computational details, see “How to Statistically Compare Two Net Promoter Scores.”) Our preliminary evaluation of that method was promising, but it was limited to one test case.

For this article, we compare this new statistical test with two other methods using real-world NPS data that we collect every two years in UX surveys of consumer applications.

Comparison of the Three Test Methods

The three methods we used were

Every two years we research select business and consumer software, most recently in 2020. As part of that research, we collected likelihood-to-recommend ratings and computed the NPS for each product. Table 1 shows the sample sizes; number of detractors, passives, and promoters; and the NPS for 17 of the most recently evaluated consumer products (with data from over 1,000 respondents). The NPS ranged from −53% to 43%, and the sample sizes ranged from 29 to 111. We organized the products into three groups based on their sample sizes (small: 29–35; medium: 49–50; and large: 101–111) and paired them so we would have three comparisons in each sample-size group with variation in the magnitude of the NPS differences (|d| in Table 1).

Table 2 shows the results (p-values) for the three methods and nine comparisons.

Even though the p-values for the Randomization Test method tended to be larger than the others when sample sizes or the NPS differences were smaller, all three methods produced consistent decisions regarding whether a difference was statistically significant (p < .05 or p < .10) for these nine comparisons.

We found that a new method based on the formula for adjusted-Wald NPS confidence intervals worked as well as a method based on NPS trinomial means. Both of these methods had better performance than a randomization test, especially when sample sizes and the NPS differences were smaller. The randomization test makes fewer assumptions about the distribution of the NPS scores, but that seems to make it more conservative than the other methods.

If conducting tests of significance only, the method based on NPS trinomial means works surprisingly well. Because randomization tests are more conservative in many cases and otherwise have similar results, we do not recommend routinely using them to assess the NPS differences.

Based on these results, we recommend that UX researchers who need to conduct a test of significance on pairs of NPS scores use the adjusted-Wald method, especially when used in conjunction with adjusted-Wald confidence intervals.