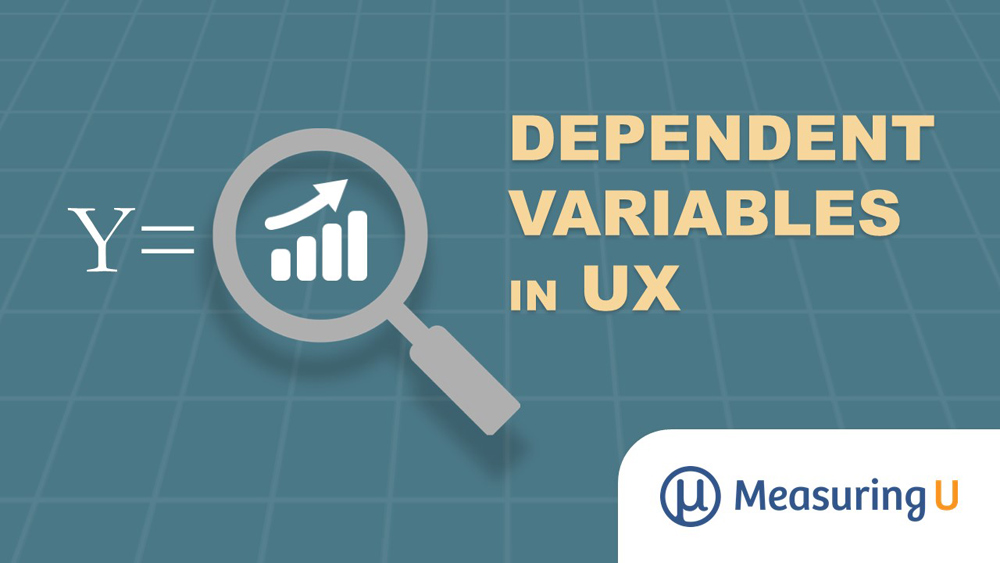 What gets measured gets managed.

It’s more than a truism for business executives. It’s also essential for the user experience professional.

In business, and UX research in particular, you don’t want to bring focus to the wrong or flawed measure. It can lead to wrong decisions and a misalignment of effort.

In an earlier article, I discussed the differences between the most common variables in UX research: dependent vs. independent, latent vs. observed, and extraneous variables.

One of the first things to do when conducting UX research is to identify the dependent variable that best fits your needs. In this article, I’ll provide some guidance for selecting the right dependent variable based on the hundreds of projects we’ve conducted at MeasuringU.

The dependent (or outcome) variable is what we hope changes when we change something, such as fixing a design element in an interface, reordering the features on a product page, or changing a company process or policy.

While the term “dependent variable” may be unfamiliar to some, especially those without a research background, dependent variables are more easily recognized as all those metrics organizations love to track. The metrics include both broad business metrics (often called KPIs) and more specific product- and task-level metrics. All levels include a mix of attitudes (beliefs, feelings, and intentions) and behaviors.

I cover both product- and task-level metrics more extensively in Benchmarking the User Experience.

All these metrics makes it difficult to know where to start. Picking the right dependent variable involves a number of considerations and shares a lot in common with assessing the quality of a measure.

Here are nine considerations you can take, roughly in prioritized order, to help pick the right dependent variables for your UX research.

Your dependent variable should first and foremost address your research goal and hypotheses.

If you want to know whether a new product design meets users’ needs, asking about usability (the SUS) is important, but it doesn’t address usefulness or utility. Instead the UMUX-Lite or items from the TAM would be better questionnaires (as would other methods).

You can have a dependent variable that perfectly addresses your research needs but may fail to align with what your organization cares about. If your organization is in a mature market and customer retention is more important than new customer acquisition, renewal rates, attrition rates, and likelihood to repurchase are probably more important than likelihood to recommend or referral rates. Effective UX research works backwards from the organizational needs and will often dictate many of your dependent variables. Dependent variables that can both address research goals and align with business needs (and existing metrics) are the first two essential steps in picking your metrics.

You don’t want a measure that addresses the research questions and business needs but is of poor quality. There are ways to assess the quality of the measure. Primarily, you should be concerned about:

If the purpose of a business is to create and retain a customer, then you want dependent variables that are ultimately meaningful to customers.

You can actually have a metric that perfectly aligns with an organization, addresses a research question, is psychometrically reliable and valid, but fails to address what’s meaningful to your customer.

A notorious example is airlines’ measuring on-time departures as a way of improving performance for customers. But pulling away from a jetway on time but sitting on the tarmac and being an hour late counted as an on-time departure. A more meaningful metric is on-time arrival (despite the challenges of weather). Of course, that too can be “handled” by just extending the time it takes to arrive.

Customers, of course, want their problems solved and solved quickly. Reducing time on customer support calls may be intended to measure call efficiency but not if it leads to calls being answered quickly but ineffectively. Call resolution is more meaningful than call time (although the latter is likely a good secondary measure when calls are resolved effectively).

You want a measure that’s meaningful to your customer, but you also want your manager (and executives) to understand what your dependent variables mean. Consequently, a more widely used measure that’s understood may be better (get more attention and action) than a less well understood and complex measure (even if it’s “better” in some way). Often you can simplify your score when you present it using percentiles, colors, and adjectives based on historical data. Oh, and don’t just make up your thresholds of what defines “good” and “bad;” that should be based on reference data. One of the best ways to interpret a measure is to compare it to published or historical data. Again another reason to work with standardized measures.

For example, if your organization uses the NPS but you heard on Twitter that a better measure might be an 11-item questionnaire from Gallup, there should be solid evidence that the measure really is better to overcome its unfamiliarity. A good way to lose a seat at the table is to ignore the measures a business uses (oh, and believe everything you read on Twitter). Your reward could be ignored research. A better approach may be to use multiple measures (which we cover next).

In most UX research projects we conduct with clients, rarely does one metric solve all the research and business needs. We’ll often have dependent variables addressing different levels. This will include business metrics such as customer satisfaction or NPS, then product-level SUS or SUPR-Q, and task-level completion rates. At the task level, we almost always include at least two dependent variables (usually completion rate and perceived ease) as it’s hard to know which one will be more sensitive to design changes ahead of time. And pragmatically speaking, if you feel strongly that you have a “better” measure than one your organization is using, one of the best ways of gaining adoption is to include both measures to allow others to equate the two (and determine how one may or may not be better).

For example, the lostness metric requires watching videos of participants (often repeatedly) and logging paths and screens. It takes time. We’ve found that the simpler measure of perceived ease captures most of it.

Eye-tracking where people look on a website or application generates very interesting heat maps and gaze-path videos as well as several dependent variables such as time in an area of interest and number of fixations. But eye-tracking requires expensive equipment and often quite a bit of time to analyze. But often self-reported data (did you notice this element?) or even easily collected click paths or mouse paths may be a sufficient dependent variable. It doesn’t mean eye-tracking doesn’t have its place; it just means be sure you really need the effort.

We’ve also seen this with logging errors in experiences. Defining an error and recording it is both time consuming and subjective. Often just noting UI issues captures the “what do we fix” and the time, perceived ease, and completion rates provide sufficient measures that describe the task experience.

You should spend time thinking about the right dependent measures. But don’t obsess. Is it mental effort, delight, love, loyalty, future intent, or affection? Which is better: error rate or completion rate? Should we throw out the NPS? Is lostness better than completion rate or task time?

There are a number of things to measure and just as many ways to measure them. But don’t get metric mania by looking for the perfect metric for your project. You’ll want to hone in on the right construct, but many measures correlate as they tap into similar things.

This holds true at the task level as well. The common metrics of completion rates, time, and errors correlate [pdf] as an approximation for task usability. It’s usually best to use multiple metrics and then average them in some reasonable way. This is what the Single Usability Metric (SUM) does. And, of course, don’t get too hung up on the “right” way to aggregate metrics!

It takes years of practice to perfect selecting the best dependent variables for UX research. But by starting with variables that address research questions, align with business needs, are psychometrically valid, and meaningful to the customer and business, you’re taking an essential first step in measuring and managing the user experience.