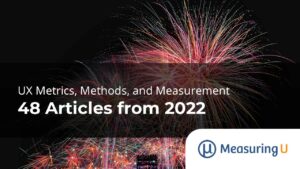 All of us at MeasuringU® wish you a Happy New Year!

In 2022, we posted 48 articles and welcomed several new clients to our MUIQ® UX testing platform, where we continue to add new features and reduce the friction in developing studies and analyzing results.

We hosted our ninth UX Measurement Bootcamp—this time a blended virtual event with a combination of MeasuringUniversity™ online courses and live Zoom sessions—a challenging five days of intensive training in UX methods, metrics, and measurement, plus group work to design a study in MUIQ, collect and analyze data, and prepare a report.

We’ve expanded our MeasuringUniversity online course offerings to include access to our NPS and UX-Lite webinars. And we offer full courses on Survey Design and Analysis for UX & Customer Research, Practical Statistics for UX and Customer Research (with new lessons on multiple regression, ANOVA, cluster analysis, and discriminant analysis in addition to previous lessons on confidence intervals, tests of significance, and sample size estimation), UX Metrics, and UX Methods.

We’ve continued to research and dive deep into UX topics in 2022, including UX metrics, methods, rating scales, and industry benchmarks. If you’re looking for a good way to catch up on anything you missed, this is a great place to start. Here’s a summary of all our 2022 articles with some takeaways from each.

This year, our work on standardized UX metrics focused on taxonomies, variants of the Single Ease Question (SEQ), sample sizes for the System Usability Scale (SUS), and prediction of grocery shopping behaviors.

We published three articles based on taxonomies we developed for UX metrics.

We published five articles on variations of the standard format of the SEQ.

We published three articles providing guidance on appropriate sample sizes for the SUS.

We published two articles documenting the prediction of grocery shopping behaviors with the SUPR-Q and predicting recommendations with the Net Promoter Score (NPS).

This year, our UX methods focus was on the Think Aloud (TA) method in usability testing (five articles) and defining taxonomies (two articles).

Our six articles on statistical topics included two based on the work of Robert Abelson (statistical rhetoric and the “laws” of statistics), two related to the distribution of UX data and the role of nonparametric statistics in UX research, a new approach to modeling the discovery of usability problems, and a description of the N-1 Two-Proportion Test.

We published seven articles on various rating scales, including selection formats, sliders vs. numeric scales, tech savviness, product experience, an update on the UX-Lite Usefulness item, product-market fit (PMF), and the effect of varying the number of response options in a series of rating scales.

In addition to the mixed-methods benchmark studies we conducted using the SUPR-Q and Net Promoter Scores, we also published our biennial SUS surveys of consumer and business software. Thanks to all of you who have purchased our reports. The proceeds from these sales fund the original research we post on MeasuringU.

In 2022 we published the results of nine UX and Net Promoter benchmark studies; SUPR-Q scores are included in a SUPR-Q license.

Our 2022 SUS benchmark studies included reviews of business software and consumer software, plus a separate report on meeting software products used by both businesses and consumers.

Every few years we assist our friends at the UXPA in helping the UX community understand the compensation, skills, and composition of the UX profession. The UXPA salary survey didn’t go out in 2020 because of the impacts of the pandemic, but we’re happy to have a new set of data from 2022 from which we have published three articles so far.

For 2023, stay tuned for a year’s worth of new articles, industry reports, webinars, new MeasuringUniversity offerings, and a new book on surveys for UX research.